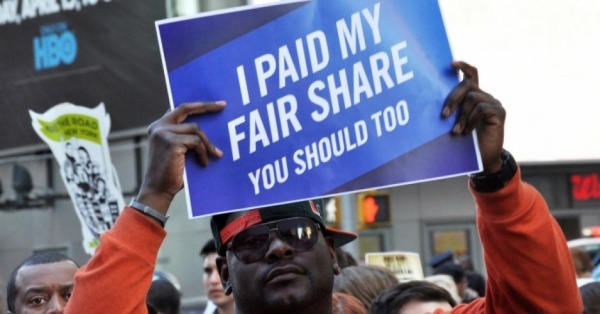 We knew President Trump’s 2017 tax bill favored corporate America, but this is ridiculous.

According to a new study, a group of 60 companies in the Fortune 500 booked nearly $80 billion in total profits in 2018, but each owed $0 in taxes. Worse: Many of these companies actually got rebates from Uncle Sam, totaling more than $4 billion.

The report, from the Institute on Taxation and Economic Policy (ITEP), highlights some of the most recognizable names in corporate America who faced no tax bill, including Big Oil giant Chevron ($4.5 billion in profits), tech darling Netflix ($856 million), pharmaceutical titan Eli Lilly ($595 million) and industrial stalwart Goodyear Tire & Rubber ($440 million).

“The specter of big corporations avoiding all income taxes on billions in profits sends a strong and corrosive signal to Americans,” the authors write, “that the tax system is stacked against them.”

Below, according to ITEP, is a list of the 26 companies that raked in at least $1 billion in profits but — through the magic of the 2017 tax bill, edgy accounting practices, special carveouts and corporate tax shelters — did not pay anything to the government on their earnings.