The 'Left-Behind' Has Spread To The Upper Middle Class 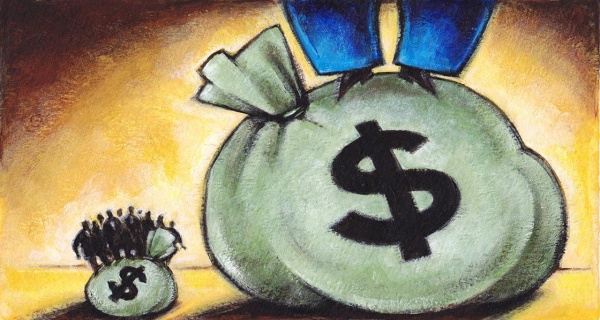 Newly available net worth data from the Federal Reserve suggests that the “left-behind” contagion has spread to all Americans aside from the top 10 percent. While still wealthier overall than most other groups, even the upper-middle class is feeling the pinch of income stagnation. The growth rate of this group’s incomes is lagging behind that of those both lower and higher on the socioeconomic ladder.

The cost of many products and services the upper middle class buys, from autos to college educations, is outpacing overall inflation. While having access to credit, these households are increasingly tapping into costlier forms of debt.

Over the past decade, household debt composition, in aggregate, has shifted away from home mortgages -- as the main item in the overall debt portfolio -- to credit with higher financing costs.

Credit card interest rates recently reached a generational high despite a relatively low prime rate. The spread between the two rates is at its highest point in almost a decade.

An analysis of more than 87 million U.S. single-family homes by ATTOM Data Solutions found that in 2018 property taxes rose by four percent annually on average.

As of February, only incomes among the top 25 percent surpassed this rate an annual basis, according to the Atlanta Federal Reserve. This means that for the rest, a greater share of income must go toward property taxes, leaving a smaller slice for everything else.

Company ownership, equity shares in both public and private firms, has been sliding for the upper middle class too. The share of equity ownership for those in the 50th percentile to the 90th percentile of net worth has fallen. The top one percent of Americans owns the majority of shares.

As of the end of 2018, net worth as a share of the U.S. total had shrunk considerably for the upper middle class. In one generation, U.S. wealth held by households from 50th to the 90th percentiles fell from 35.2 percent of the total to 29.1 percent. Most of this wealth has transferred to the top 1 percent of U.S. households.