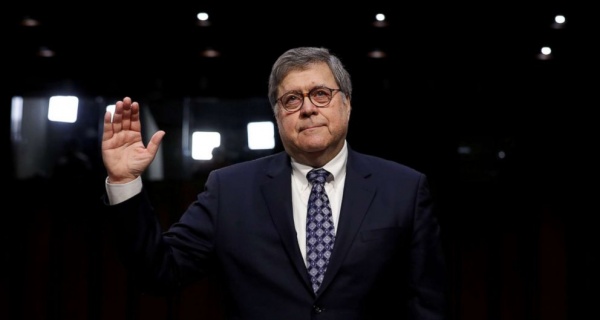 Attorney General Bill Barr’s statements today on supposed “spying” by the FBI on the Trump campaign before the Senate Committee on Appropriations were indefensible. They were at once indecipherable and contentless, on the one hand, and incendiary, on the other hand.

I am not one of the many people looking to think ill of Barr. Indeed, I have taken a lot of heat recently for being willing to give him the benefit of the doubt on the specific issue of his production of a redacted version of the Mueller report. That said, his comments today were reckless. They will play into gross conspiracy theories. They are also unfair to the individuals who Barr suggested had engaged in some sort of unspecified wrongdoing.

“I’m not suggesting that those rules were violated, but I think it’s important to look at that,” he said. “I’m not talking about the FBI necessarily but intelligence agencies more broadly.”

“I need to explore that,” Barr added, noting that he had not yet formed a team to do so. “I also want to make clear this is not launching an investigation of the FBI. Frankly, to the extent that there were any issues at the FBI, I do not view it as a problem that’s endemic to the FBI. I think there was probably a failure among a group of leaders there in the upper echelon.”

Later in the hearing, Barr offered a more tempered description of his concerns, saying that he wanted to understand whether there was “unauthorized surveillance” of political figures. “I believe there is a basis for my concern, but I’m not going to discuss the basis for my concern,” Barr said. “I am not saying that improper surveillance occurred. I am saying I am concerned about it, and I am looking into it. That is all.”

“Have you any evidence that there was anything improper in those investigations?” asked Sen. Jack Reed (D-R.I.).

First off, if the attorney general of the United States has concerns about whether the rules and the law were followed in a high-profile matter, he certainly has an obligation to satisfy himself on that point. I had thought that was why the Justice Department had an ongoing inspector general review of the origins of the Russia probe. I had also thought that’s why former Attorney General Jeff Sessions asked a U.S. attorney to look things over. Barr today offered no information about why current reviews are inadequate to address whatever questions he may have.

Second, the use of terminology like “spying” and “spying on a political campaign” is bound to play into ongoing conspiracy theories, promoted by the president himself, about the origins of the Russia investigation. The Post reports that “[a] person familiar with the attorney general’s thinking said he was not trying to provide conservatives with rhetorical red meat and was using the word ‘spying’ in the technical sense of collecting intelligence.” If that’s the case, then Barr was being very naive about how his words would be received—and how they would be used. Fox News’s Gregg Jarrett, for example, said tonight on Sean Hannity’s show that Barr “knows … that the process by the FBI was corrupted by political bias and personal animus.” The reaction was not just predictable; it is quite reasonable. It is a fair inference from Barr’s comments today that he was intentionally hinting that there was something rotten at the FBI in 2016. If he was not doing so, he was being foolish indeed not to anticipate that he would be pouring gasoline on a fire.

Third, the attorney general’s comment that “I think spying did occur, yes. I think spying did occur” either is a truism or is wholly unsupported by any information in the public record. If what Barr meant was that the intelligence community received information from a partner service and opened an investigation in the summer of 2016, that is certainly true. There is also nothing new in that statement; all this has long been in the public record. If he meant that there was surveillance of Carter Page that autumn, that is also true, and also unremarkable (though the surveillance began after Page left the campaign). If, on the other hand, Barr meant that there was some additional collection involving figures associated with the Trump campaign that may have been improper, he offered no basis for concern on this score. Indeed, asked if he had any evidence of improper collection, he responded, “I have no specific evidence that I would cite right now.” But, he said, “I do have questions about it.”

When the attorney general “has questions” about the conduct of his department, the proper thing to do is not to dangle those questions in a congressional hearing in a fashion bound to stir up conspiracy theories. It is to find out the answers to those questions and take appropriate remedial action.

Fourth, Barr slimed people today. He didn’t name the group of people around former FBI Director James Comey, but when he described “a failure among a group of leaders there in the upper echelon” of the bureau in connection with possible political spying on the Trump campaign, he was unsubtly referring to the very group of people about whom the president has been tweeting bile for months. Ironically, Barr expressed the concern that the “spying” may not have been “adequately predicated,” yet today it was he who suggested that a particular group of known individuals may have been engaged in improper political espionage. His statement was, well, not adequately predicated.

If Barr had quietly sought to satisfy himself that the rules were followed, nobody reasonable would think it inappropriate. Having engaged in this incoherent, public display, however, he has created a problem he needs to fix. The anonymous sources close to Barr who have been attempting to walk back the remarks are offering weak tea. Barr needs to articulate publicly what factors have given rise to concerns that are not amply being addressed in existing reviews. If he can’t do this, he needs to apologize and back down.