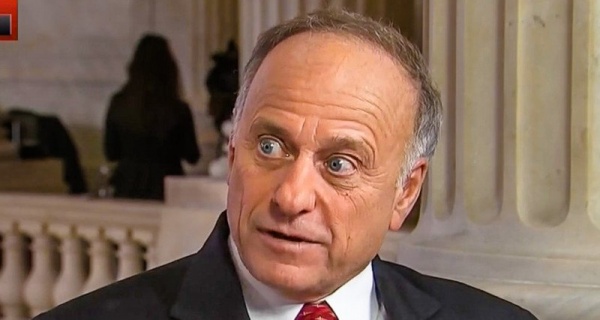 Iowa’s GOP Rep. Steve King came under fire for a thinly veiled racist remark about New Orleans’ Hurricane Katrina victims in the aftermath of a recent flood in his state.

He told constituents at a town hall meeting Thursday that Katrina victims—the vast majority of them Black—pleaded for government help, but folks in his home state of Iowa “take care of each other,” The Advocate reported.

“Here’s what FEMA tells me: We go to a place like New Orleans and everybody’s looking around saying, ‘Who’s gonna help me, who’s gonna help me?’ When FEMA responds to problems in Iowa, they’re just always gratified when they come and see how Iowans take care of each other,” he said.

“My heart goes out to all Iowans. Though it unsettles me that @SteveKingIA would dare compare them to the countless victims of Katrina, many of whom lost their lives. When people show you who they are, believe them. Steve King is a white supremacist and I won’t stand for it,” said Richmond, a former chair of the Congressional Black Caucus.

King claimed that he visited New Orleans, a majority Black city, several times after the 2005 hurricane struck. More than 1,800 people died from the disaster. By contrast, there were at least three reported deaths in the recent Iowa floods.

“When communities are affected by disasters, we come together to help each other, not tear each other down,” he said.

“His comments about Katrina victims are absurd and offensive and are a complete contradiction to the strength and resilience the people of New Orleans demonstrated to the entire nation in the wake of the total devastation they experienced,” Scalise said.

King, who has a long history of promoting white nationalism, also found himself in the national spotlight last week after suggesting on social media that Republicans would defeat Democrats in a violent civil war. That came against the backdrop of a devastating white supremacist mass shooting in New Zealand and Donald Trump bragging about his “tough” supporters who are willing to use violence.