Courts Are Being Flooded With Right Wing Zealots, Democrats Say 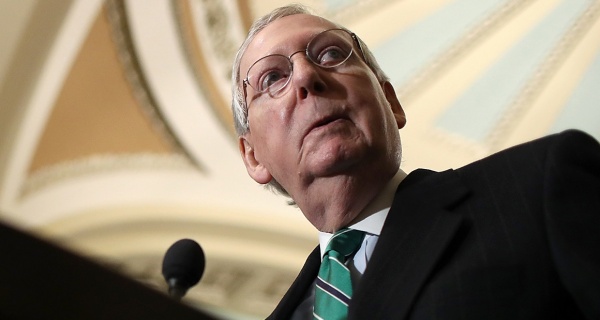 The Democratic Senatorial Campaign Committee has accused Senate Republicans of working to pack U.S. courts with "extreme right-wing judicial nominees…[with] no signs of slowing down."

In a Twitter statement on March 21, the campaign committee, which describes itself as the "last line of defense against Trump," accused Senate Majority Leader Mitch McConnell and Senate Republicans of handing "extreme right-wing" nominees lifetime federal positions.

The committee said: "There’s Neomi Rao, who has a frightening record on sexual assault, LGBTQ rights, and much more."

Rao, a prominent Indian-American lawyer, was sworn in as U.S. circuit judge for the District of Columbia Circuit Court of Appeals earlier this month, filling the seat left by controversial Supreme Court Justice Brett Kavanaugh.

During her confirmation hearing, Rao faced scrutiny over opinion pieces about sexual assault that she wrote as an undergraduate at Yale. In one article, the judge wrote that if a woman "drinks to the point where she can no longer choose, well, getting to that point was part of her choice."

In a letter to the chairman of the Senate Judiciary Committee, Republican Senator Lindsey Graham, Rao expressed regret over her past writings, saying she had been a sheltered college student who failed to recognize the impact of her words.

"I particularly regret the insensitivity demonstrated in my remarks on rape and sexual assault," she wrote. "While responding to events and debates on campus, I failed to recognize the hurt that my words would cause a survivor of such crimes.

"I recognize now the arguments I made might discourage a victim from coming forward or from seeking help. As a society we should create an environment where survivors feel empowered and comfortable coming forward. I am sorry for anything in my college writings to the contrary," Rao wrote.

The Democratic Senatorial Campaign Committee also highlighted the appointment of Chad Readler to the U.S. Court of Appeals for the 6th Circuit, branding him the "engineer behind the Trump Administration's plans to destroy the ACA (Affordable Care Act.)"

When Readler's nomination was announced, Families USA, an advocacy group for health care consumers, slammed the decision, saying that during his time as acting assistant attorney general in the Justice Department’s Civil Division, Readler filed a brief deeming the ACA unconstitutional.

“The position in that brief was upheld last December by a federal judge in Texas v. United States," Families USA Executive Director Frederick Isasi said in a statement at the time. "The lawsuit threatens not only access to health care for an estimated 50 million people, but quality of coverage and important financial protections for families across the nation."

The organization said that Readler's "legal ineptitude coupled with the blatant hostility he has displayed toward a law that is intended to protect the well-being of individuals by ensuring they have access to quality, affordable health care should not be ignored, excused or forgotten. America’s families deserve better than Chad Readler."

Democrats had also slammed Readler's nomination, with Minority Leader Chuck Schumer saying ahead of his confirmation vote: "Shame on anybody who votes for Mr. Readler."

Ultimately, both Rao and Readler were successfully appointed.

"Both were confirmed to serve lifetime federal positions. And the list goes on," the committee wrote. "At this rate, McConnell and Trump could leave few, if any, vacancies open in 2021. We must fight to take back the Senate so we can protect our courts."