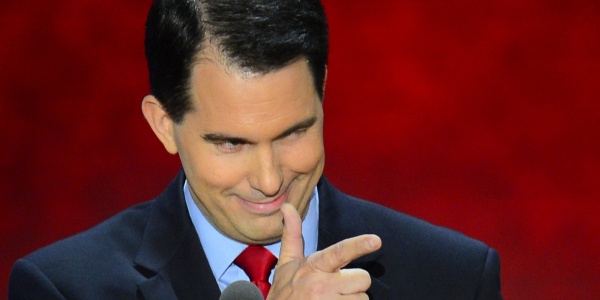 Scott Walker, the goggle-eyed homunculus once known as the governor of Wisconsin, has re-emerged with a new gig. Actually, he has a couple of new ones. Both are financed by the big noises of the wingnut welfare universe. First, he's signed on with a group pushing one of the Worst Ideas In American Politics, the Balanced Budget Amendment, through an equally bad idea, the Convention of the States. He's also taken a job with a group dedicated to protecting partisan gerrymandering and voter suppression similar to the regimes he put in place while governor. From Politico:

Walker is jumping into the redistricting wars with a warning to fellow Republicans: The party needs to step up its focus on political map-drawing to match the organizing efforts of the National Democratic Redistricting Committee, the Democratic redistricting group founded by former President Barack Obama and led by former Attorney General Eric Holder.

“For donors and activists — absolutely, there is not nearly the level of intensity right of center as there’s been on the far left” surrounding redistricting, Walker said in an interview. “That’s why I’m trying to raise the issue’s importance...I know firsthand the impact the other side’s efforts can have on this,” Walker said.

As well he should. In his two terms as governor, Walker and his pet legislature monkey-wrenched the state's election maps to the point where even the Supreme Court noticed, even though the Court punted the issue back to the lower court rather than decide it. (On Tuesday, the Court will hear arguments in two cases involving partisan gerrymandering.) In 2018, for example, Democratic candidates won 54 percent of the popular vote and yet the Republicans held onto a nearly two-thirds majority in the state legislature.

This latest work, however, pits Walker and his group against former Attorney General Eric Holder's well-financed effort to roll back the legalized ratfcking on which so much power depends in so many places. Significantly, Holder's group has targeted an upcoming race for the Wisconsin supreme court. This is not a new thing. While he was still governor, Walker went up the wall when Holder's group forced him to schedule special state legislative elections on which Walker was stalling.

Now, not only is Holder's group mobilized, but there is a federal lawsuit filed by the state's Democrats, and in which Robin Vos, the speaker of the state assembly, has refused to testify. Walker's successor, Democratic governor Tony Evers, proposed in his budget a nonpartisan redistricting process. There is going to be a long, bloody fight merely to unravel what Walker did during his two terms as governor, let alone get Wisconsin's progressive traditions back to where they were. This would be only a start.