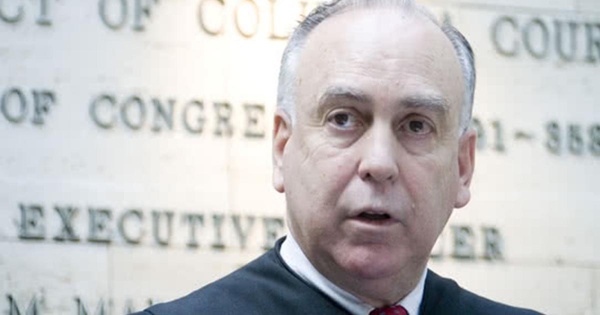 Date Posted: Friday, March 8th, 2019
It is striking that a judge just sentenced Paul Manafort, a major target of the Mueller investigation, to only 47 months in prison. The Sentencing Guidelines justified a sentence well above fifteen years. It was all-important that Manafort, who had been the head of the Trump presidential campaign, receive a strong sentence.
This was partly for the general reason in sentencing, to send the message to potential malefactors of the consequences. But, it was also needed to persuade Manafort to tell Mueller (and, eventually, in some forum, the public) the truth about President Trump and Russia.
Instead, this weak sentence sends these kind of messages: it is not so bad to use Republican connections to cash in with Putin’s allies; Trump’s campaign manager is worthy of much, much more respect than in the Sentencing Guidelines; Mueller’s quest for the Russia connection deserves little help.
Senior U.S. District Judge T.S. Ellis was nominated to the bench in 1987 by President Ronald Reagan, who favored conservative picks. Before then, he had worked since 1970 for Hunton and Williams, a very well known conservative Richmond firm.
President Reagan nominated Judge Ellis to the Eastern District of Virginia. Presidents have a special reason to want to stack that particular court with conservatives. The Pentagon and the CIA are in that district.  There is a great desire among conservatives to stack that district court to handle the cases that concern national security brought in that district, including espionage cases.
Take a comparison of the Manafort case with another prosecution of a political figure, a Democratic Congressman from Louisiana named William J. Jefferson. I was a peripheral observer of that case. The FBI had raided Jefferson’s Congressional office and carried off his computer hard drive. The Judiciary Committee held a hearing on the violation of Congressional independence by that raid, and I was the principal witness (because I knew the established limits on prosecution tactics as a former House General Counsel and I was now a professor.)
Jefferson’s case basically hinged on charges of bribery. It was nationally famous because agents raiding his house found cash in the freezer.
Manafort may have gotten off easy with four years, but Ellis threw the book at Jefferson.  In 2009 Ellis sentenced Jefferson to 13 years, the longest sentence of any Congressman to that date. (After further twists and turns Ellis let Jefferson off in December 2017 for five years time served.) It seems that while Judge Ellis can sympathize with Manafort, the Republican presidential campaign manager, he did not sympathize with  Jefferson.
In the interest of fairness it is worth noting that Ellis stated opposition to mandatory minimums.
And there are some who speak favorably of his lack of political leanings. This is from a Washington Post profile of him:  "Lawyers say that although Ellis might be tough on them, politics is not the Reagan appointee’s motivation.
“He is personally a Republican, and his political opinions did not line up with mine, but I literally cannot recall an instance where I thought that was an issue. He’s not an ideological judge, he’s a law-driven judge,” said Emily Martin, general counsel for the National Women’s Law Center and a former clerk for Ellis.
Everything now depends on the sentence Manafort receives in his other case, and whether it is consecutive or concurrent. Imagine the relief for Trump if it is a sentence no longer than 47 months and it runs concurrently. If Manafort had gotten (or still gets) a sentence of more than 15 years, Trump would face the problem of pardoning Manafort to prevent him from experiencing great pressure to cooperate with Mueller.
The press and public have been waiting for the first use of the pardon power as a major statement about Trump.
Now, Trump might just get off and not need to display the pardon weapon. Trump should say "Thank you, Judge Ellis."