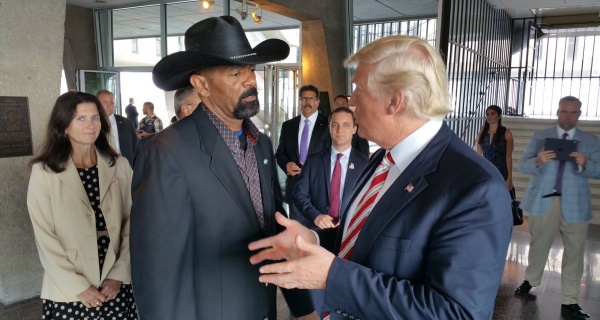 One of  Donald Trump’s most loyal Black supporters, former Milwaukee County Sheriff David A. Clarke, was reportedly fired from at least two positions with organizations that support him. That news led to speculation that he may have fallen out of Trump’s good graces.

It was unclear exactly why Fox made that decision, but a source told the Daily Beast that Clarke’s “rhetoric became crazier and crazier and most shows refused to use him.”

At the same time, the news outlet learned that Clarke lost his position as a senior adviser and spokesman for the pro-Trump super political action committee (PAC) America First Action. His job at American First involved serving as a public face for the super PAC. Once Fox fired Clarke, it became difficult for him to do his job of reaching conservative audiences to promote Trump’s agenda.

After stepping down as sheriff, Clarke sought a position with the Trump administration. However, former Department of Homeland Security Secretary John Kelly blocked him from getting a job at the federal law enforcement agency. Later, when Kelly became White House chief of staff, he prevented Clarke from obtaining a White House position.

Part of Clarke’s problem was that he has tons of unwanted baggage. He oversaw a shoddy Milwaukee jail system in which four people—including a baby—died.

Instead of working directly for Trump, Clarke landed the position in September 2017 with America First, which shares his values, he said in a statement.

“It gives me the chance to do what I love most—promote President Trump’s agenda, including his fierce support for the American law enforcement officer, and ensure the will of the American people who got President Trump elected is not derailed by the left or the self-serving Washington establishment,” he added.

Part of the reason the reason behind Clarke’s banishment from Fox stems from his on-camera rants against Parkland school shooting victims. On February 14, 2018, a gunman opened fire at Marjory Stoneman Douglas High School in Parkland, Florida, killing 17 students and staff members.

In one instance, Clarke accused George Soros, the liberal billionaire, of funding the students’ gun control campaign. At the same time, Fox was trying to manage fallout after its primetime star Laura Ingraham harshly criticized one of the Parkland students, David Hogg.