Watch Out: McConnell Is Putting His Stamp On Judicial Confirmations 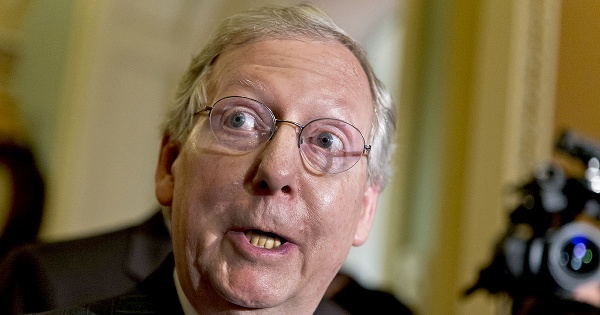 Date Posted: Wednesday, March 6th, 2019
When Mitch McConnell announced the great Merrick Garland Gamble of 2016, declaring that Senate Republicans would block President Obama from fulfilling his constitutionally-delegated duty to fill vacancies on the Supreme Court, even he could not have imagined it would pay off this handsomely.
In two years, the majority leader facilitated not only a trillion-dollar tax cut for the wealthiest Americans but also the confirmation of a pair of Supreme Court justices and nearly three dozen appeals court nominees—many of whom took positions McConnell had held open during the Obama administration. These judges preside over tens of thousands of cases every year, and under McConnell's watchful eye, Trump has pushed their courts slowly and inexorably to the right.
In 2019, McConnell faces a different set of circumstances. A new Democratic-controlled House stands in the way of enacting a sweeping legislative agenda, as does a scandal-ridden president whose obsession with building a border wall puts him increasingly at odds with members of his own party. Thus, McConnell is embracing a new method for cementing his legacy, and one which he can implement on a near-unilateral basis: shepherding as many federal district court nominees as possible through the confirmation process before his party loses the White House, the Senate, or both.
According to Politico, McConnell is preparing to invoke a "new nuclear option" by reducing the amount of time for debate over district-level judicial nominees from 30 hours to two. The phrase refers to a procedure by which senators, with a simple majority vote, can change the rules governing how they conduct business. The nuclear option's most famous invocation came in 2017, when McConnell and company, lacking the 60 votes necessary to install Neil Gorsuch in the Supreme Court seat stolen from Garland, simply did away with the requirement altogether. This proved to be a wise choice a year later, as the nomination of Republican justice Brett Kavanaugh would almost certainly have failed if McConnell had had to marshal meaningful bipartisan support.
As Politico notes, if it is successful, this change would have a dramatic effect on Trump's ability to address current district court vacancies. In addition to axing that 60-vote threshold, McConnell has also dispensed with "blue-slipping," a longstanding Senate tradition that allowed senators to nix the nominations of objectionable nominees from their home states. By eliminating yet another method by which Democrats can voice their opposition, Republicans further insure themselves against the distinct possibility that 2020 does not go as well as 2016. South Dakota senator John Thune gives the game away when discussing why confirming these lower-court judges is suddenly such a "high priority" for the caucus: "I mean, it’s one of the things we can do that we don’t need the House’s help with."
There are a number of reasons why Republicans are so good at stocking the federal bench: the emphasis their candidates place on the subject in elections; the existence of the Senate, an undemocratic anachronism that should be abolished; and a willingness to ignore precedent when their preferred outcomes appear in doubt. Well-heeled donors—Kochs and Mercers among them—have spent decades investing in outfits like the Federalist Society, which maintains a robust pipeline of conservative lawyers that it grooms for judicial service. During the Gorsuch and Kavanaugh confirmation hearings, the White House relied heavily on the organization's president, Leonard Leo, for guidance. Sure enough, Leo makes a triumphant cameo in this Politico report: "What you could witness under Senator McConnell's leadership," he says, "is a situation where an incoming president has very, very few open seats to fill."
Of the GOP's many cynical initiatives designed to preserve minority rule in this country—voter suppression for one, and partisan gerrymandering for another—its strategy for capturing the courts is the most important one because it is the most foolproof. Even the most diligent efforts to discourage African-American turnout or draw lines around safe red districts will always run the risk of failure, thanks to some combination of demographic shifts, random chance, and the passage of time.
But federal judges, who have final say over whether things presidents and legislators do comport with the law, enjoy life tenure. And the more conservatives who sit on the bench, the easier it will be to use the legal process to hamstring ambitious progressive ideas—such as new initiatives like Medicare for All and a Green New Deal—in the decades to come. This will be true even if voters chase from office the politicians who nominated and confirmed those federal judges, and even if the policies in question are wildly popular with the American public. By filling the courts with dependable acolytes now, Mitch McConnell has a good chance of effectively remaining in power long after he actually loses it.