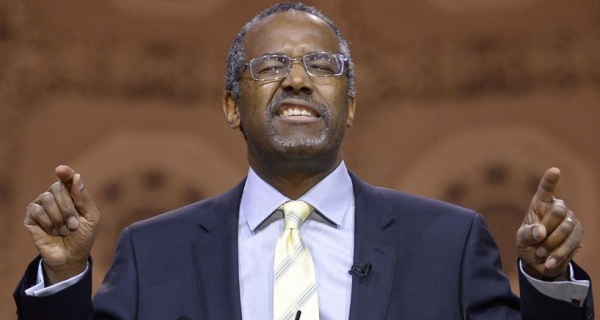 Republicans are still reeling from Michael Cohen testimony before the House Committee on Oversight and Reform, especially when he started the obvious by calling Donald Trump a racist. Of course, Ben Carson is defending 45.

According to Politico, Carson babbled, “I think Cohen is trying to ingratiate himself to the people who hate Trump. I’ve never seen anything that even remotely would remind me of racists, and believe me, I recognize a racist when I see them.”

In case you missed it, during Cohen’s opening remarks he said about Trump, “He is a racist. The country has seen Mr. Trump court white supremacists and bigots. You have heard him call poorer countries ‘shitholes.’ In private, he is even worse. He once asked me if I could name a country run by a Black person that wasn’t a ‘shithole.’ This was when Barack Obama was President of the United States.”

He continued, “While we were once driving through a struggling neighborhood in Chicago, he commented that only Black people could live that way. And, he told me that Black people would never vote for him because they were too stupid.”

In a bizarre move, Republican Rep. Mark Meadows pulled out Lynne Patton, who is reportedly Eric Trump‘s former party planner and now works at HUD with Carson, to prove 45 could not be racist.

Meadows babbled, “Lynne Patton says she would not work for a man who is racist… She disagrees with you. She says as a daughter of a man born in Birmingham, Alabama, that there is no way that she would work for an individual who was a racist.” Meadows, who somehow believe Patton represents all African Americans, asked, “How do you reconcile the two of those?”

As Patton silently stood behind Meadows, willingly debasing herself even more than she already has being part of the Trump administration, Cohen said, “Ask Ms. Patton how many Black people are executives at the Trump Organization? The answer is zero.”

As for Trump’s clear racism, housing discrimination lawsuits from the 1970s, the racist birther movement against Obama, the Muslim travel ban (a federal judge said it was racist), the Central Park Five (Trump called for the execution of five Black teenagers with a full-page ad in the New York Times in 1989), saying a judge of Mexican heritage could not do his job because he is Mexican and constantly attacking Black public figures (Jay Z, Maxine Waters, Jemele Hill, Colin Kaepernick, etc.), but ignoring people like Eminem… just to name a few.

In other news, Carson said he will leave the administration after Trump’s second term “because I think you have just as much influence — maybe more — there.”

Let’s just hope there is no second term for Trump.