Trump's Economics Are Not Yielding The Growth He Promised 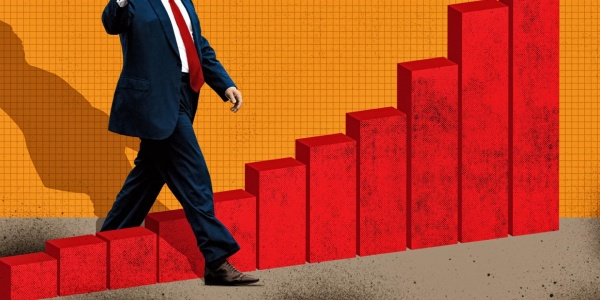 Throughout the 2016 campaign and since, the president and his party have vowed to kick-start tepid Obama-era economic growth. Specifically, they insisted tax cuts and deregulation would return growth to its post-World War II average of 3 percent — a level, candidate Trump said derisively, that President Barack Obama became "the first president in modern history" never to reach in a single year.

New government data on Thursday morning show that Trump, too, has failed to reach the 3 percent promised land, according to one major metric. The Commerce Department's Bureau of Economic Analysis measured 2018 growth at 2.9 percent, matching the peak Obama enjoyed in 2015.

By that measure, the economy grew 3.1 percent. But Obama, too, reached 3 percent growth on a four-quarter basis four different times.

Where Obama failed to enjoy 3 percent annual growth was on the BEA's official annual number. His 2015 peak was 2.9 percent, like Trump's for 2018. Thursday's preliminary 2.9 percent figure could later be revised, although economist Mark Zandi of Moody's Analytics said the most likely direction would be down.

For the rest of the president's term, economic forecasters agree, that number will decline.

"2018 will be the high-water mark for growth in the Trump administration," Zandi predicted. He expects the decade-old economic expansion will shrink to 1.1 percent growth in 2020, with a better-than-even chance of recession.

For the 21st century economy, 2.9 percent represents strong performance in any event. Not since 2005, during George W. Bush's presidency, has America seen a full-year expansion of 3 percent or more. Moreover, 2018 marked the second consecutive year that growth accelerated by six-tenths of a percentage point from 1.6 percent in Obama's final year in office.

Economically, that falls short of the upgrade Team Trump pledged. Politically, it demonstrates the hollowness of a core GOP campaign theme.

The theme hardly originated with Trump. Announcing his presidential candidacy in 2015, then-frontrunner Jeb Bush blamed Democratic policies for "the slowest economic recovery ever" and identified the solution as tax cuts and deregulation.

"There is not a reason in the world why we cannot grow at a rate of 4 percent of year," Bush declared.

Trump, with characteristic grandiosity, dismissed that argument and outbid Bush. "We think it could be 5 or even 6" percent, he said.

His economic advisers remained more cautious. But they cast sustained growth of 3 percent or more, driven by new, productivity-boosting business investment, as the floor beneath their strategy for making Americans better off and protecting the federal budget.

"The foundation for the plan is 3 percent growth," budget director Mick Mulvaney told Congress. "In fact, that IS Trumponomics."

Growth ticked up in 2017 to 2.2 percent, though that rate fell below what the Congressional Budget Office had forecast before Trump's election. As the president took steps toward deregulation, Republican allies in Congress called tax cuts critical to achieving their 3 percent goal.

The tax cuts passed in December 2017. And when growth surged to 4.2 percent in the second quarter of 2018, the White House declared victory.

"We're on track to reach the highest annualized growth in 13 years," the president assured reporters.

In fact, growth in a single quarter had topped 4.2 percent four different times during the Obama administration. A broad range of analysts had forecast that a deficit-financed tax-cut would stimulate short-term boost beginning in 2018.

Yet even as 3rd quarter growth slowed to 3.4 percent, White House advisers reiterated their confidence. In July, Treasury Secretary Steve Mnuchin called the U.S. "well on the path" for four to five years of sustained 3 percent growth.

In December, top White House economist Kevin Hassett sounded the same note while acknowledging a slowdown in business investment. "We're definitely going to be at 3 or above 3" for both 2018 and 2019, he told CNBC.

Thursday's BEA data show otherwise. Growth kept falling in the fourth quarter, to 2.6 percent. The increase in business investment has continued to taper.

Having predicted growth of "substantially over 3 percent," former National Economic Council director Gary Cohn, has blamed Trump's trade tariffs for offsetting the boost from the tax cut. But the White House and its allies lacked credible evidence for their growth claim to begin with.

"The 3 percent long-term projection was always a stretch in light of the demographic headwinds," Harvard's Greg Mankiw, who chaired the Council of Economic Advisers for President Bush, told CNBC.

"The real question is how much the trend has improved: are we decelerating to 2.5 percent instead of 2.0 percent?" asked Holtz-Eakin. "The test of the Trump administration policies will be their impact on productivity growth, and the data are not yet in."

Meantime, economists at CBO and the Federal Reserve have cut their forecasts for 2019 growth to 2.3 percent. For the long-term, both project growth below 2 percent.