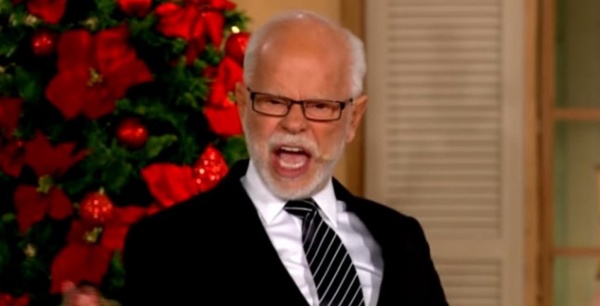 Date Posted: Tuesday, February 26th, 2019
Commenting on how President Donald Trump allows pastors into the Oval Office and on Air Force One to counsel him and pray with him regularly, Pastor Jim Bakker said that Trump is honoring God and this is producing miracles, which is "why the world hates him -- they hate him."
Bakker added that there is a "Daniel Company," a group of pastors and faithful Christians who pray for the president and advise him -- "preparing him" to deal with the challenges of his office -- and this company includes Pastor James Robison, as well as Vice President Mike Pence and White House Press Secretary Sarah Huckabee Sanders.
On The Jim Bakker Show, Feb.22, the evangelist played a clip of Trump at the State of the Union saying, "All children, born and unborn, are made in the holy image of God.”
Bakker then said, “Do you realize what strength, and we call it guts, it takes to say what that man just said? Presidents don’t talk that way anymore because they have to appease everybody. But he wants to please God."
“He’s not perfect, none of us are perfect," said the evangelist. "But he is being taught and mentored and prayed with more than probably any president in the history of the United States of America."

“When he flies, he has pastors with him," said Bakker. "When he’s in the White House, he has pastors with him. I personally know people who have led him to Christ. He’s been saved so many times that—I’ll tell you what—if it counts, he’s got more numbers than anybody I know of. And I’m serious. I’m serious. I could name the people that have prayed with him."
Bakker continued, “He honors God. He lets the preachers come in and lay hands on him, in the Oval Office."
As for evangelist and author James Robison, “he is one of them that led the president to the Lord Jesus Christ," said Bakker.  "He’s just one of them. But they were leading him, and guiding him, and preparing him, nurturing him through it all."
“There is a Daniel Company, and it’s so big," he said.  "This is probably one of the basic reasons why there’s miracles coming out of the White House and why there’s a miracle in America."
"And that’s why the world hates him -- they hate him," said Bakker.