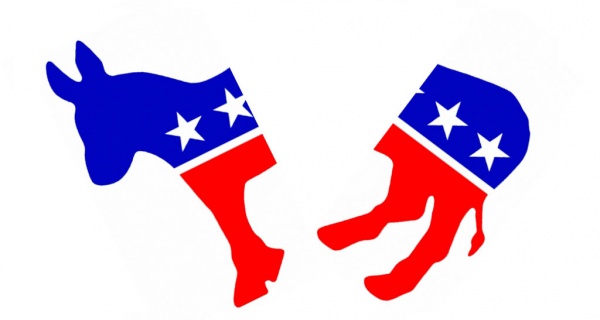 Date Posted: Monday, February 25th, 2019
We’re now well under a year away from the Iowa caucuses, and an unusually — perhaps uniquely — large Democratic field is forming to compete for the opportunity to face Donald J. Trump in 2020. It is highly appropriate that before the festivities intensify, multiple voices are being raised to remember the wolf at the door before engaging in any intramural fisticuffs.
At the American Prospect, veteran labor political operative Steve Rosenthal offers four “rules” for 2020 Democrats in order to avoid a “circular firing squad” that helps Trump win the general election.
* Don’t try to stifle new ideas, new opinions, or new plans.
* Democrats need a robust debate on the issues instead of misleading or attack ads aimed at tearing each other down.
* Every Democratic candidate should sign a pledge that they will give their wholehearted support to whoever eventually wins the party.
Rosenthal’s fourth guideline he calls the “Two-For-One Rule:”
Last month, a friend of mine suggested that all the Democratic presidential candidates (and their supporters — that includes super PACs) refrain from being overly negative about the other Democratic candidates in the field. He said any time he feels tempted to say or write something bad about one of the candidates, he would precede it with two positive things.
In the same vein, progressive economist Jared Bernstein in a Washington Post op-ed suggested that 2020 Democrats (and presumably the media) constantly keep in mind that on policy issues “you would need a high-powered electron microscope to see the difference among the Democrats, compared with the difference between them and the Republicans.” And his big “rule,” borrowed from another Democratic veteran, Ron Klain, is even simpler than Rosenthal’s:
A debate about ideas is healthy, a debate about motives is not. The Democrats should hash out their differences in 2020 without slashing up one another — not casting aspirations on each other’s integrity, motivation or intentions. It is that latter path that creates an opening for Trump’s reelection in 2020.
Both these pleas (and others like it) are based on a common understanding of several unique things about the 2020 race:

1. The stakes of a general election win could not be much higher.
Horrible as having Trump as the 45th president has been, a second term would be potentially catastrophic for progressives. The impact on the Supreme Court alone could be seismic. The battle against climate change could be lost for good. The odds of a stupid war or a global economic meltdown would go way up. And a second loss to Trump would be so discouraging to progressive voters that the Democratic Party’s very future might be endangered. Some activists and operatives think it’s critical the ideological direction of the Democratic Party be decisively turned in one direction or another in 2020. Important as a “struggle for the soul of the party” may be, it cannot possibly be as important as denying Trump’s reelection.
2. Trump and his media allies will ruthlessly take advantage of any Democratic divisions or exposed candidate weaknesses.
There has never been a president or presidential nominee swifter than Trump in weaponizing conflicts in the opposing party, and he fully understands it’s the only way he can win, as Michael Tomasky points out in a rueful reflection on how the 2016 Democratic primaries played a big role in Trump’s win:
The only way Trump can win is by convincing millions of people that the Democrat is just unacceptable under any circumstances. This will involve a campaign of horrendous lies and smears against whoever is the nominee. He will catch the scent of that nominee’s weakness, and he will hammer at it and hammer at it, hoping to scare tremulous and confused voters into voting for him.
Given that reality, there is really only one terrible and unforgivable thing the Democratic contenders can do to one another, and that is to use the primary season to expose that Achilles Heel and worsen it. This is what Sanders did with respect to Clinton in 2016. By calling her corrupt and in hock to Wall Street, he set up Trump’s “Crooked Hillary” line of attack.
This isn’t just about Sanders, to be clear. There’s no question that had Bernie won the nomination, Clinton’s criticisms of him as an extremist would have instantly made their way into Trump’s campaign rhetoric.
3. The sheer size of the 2020 Democratic field will make personal attacks and exaggeration of issue differences unusually tempting.
A candidate staring at a five-point deficit and an empty campaign treasury before a key, must-win primary would likely consider selling off their children for a well-timed day of media dominance, and unfortunately, nothing works quite like a negative attack, whether it’s personal or ideological. But 2020 may be exactly the wrong year to assume Democrats can laugh off conflicts and kiss and makeup after the primaries are over (if, indeed, the primaries even produce a clear winner). The only way to head off this dynamic is if other candidates along with party leaders and activists come down like the wrath of God on any candidate that succumbs to the temptation of straying over the line into attacks on a rival’s character or motives, or forgets to remind listeners that any differences on issues are laughably small when compared to the terrifying agenda of the GOP.
4. It’s not enough for candidates to play nice with each other: They need to rebuke supporters who don’t and won’t.
Anyone with the least understanding of social media knows that it won’t cut any ice if presidential candidates stay above-board while their most passionate supporters go after opponents with a tire iron — a tool that will be happily picked up by Team Trump the minute it’s discarded. Of course, politicians can’t control everything their fans say and do. But public criticism may usefully shame the worst offenders into some self-control.
They should all preemptively demand a certain degree of civility, and agree in advance to accept defeat quickly if and when it happens. The Clinton-Sanders mutual grievances are still infecting intra-Democratic discourse to this day; another round of similar recriminations in 2020 could be even more harmful.
Soon we will be into the heat of the nomination race, and making up rules for civility on the fly won’t be practical. It would be smart for Democrats right now to make sure that on November 4, 2020, they aren’t looking down the barrel of an eight-year Trump presidency and wondering how their party blew it again.