Did The KKK Invent The Slogan 'America First'? 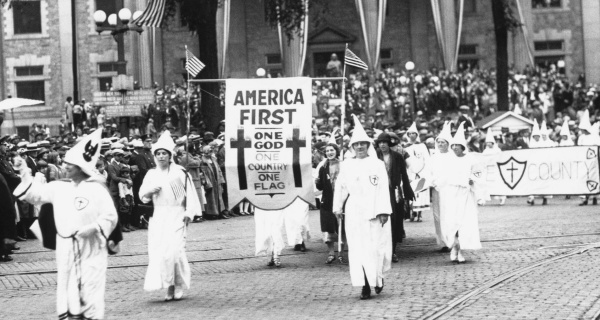 Early on in his bid for the United States presidency, Donald Trump adopted a catchphrase that encapsulated his entire political philosophy in just two words: “America first.”

The slogan was front and center in Trump’s first major foreign policy speech as a candidate in April 2016:

My foreign policy will always put the interests of the American people and American security above all else. It has to be first. Has to be. That will be the foundation of every single decision that I will make. America first will be the major and overriding theme of my administration.

He then used the phrase to characterize his planned approach to immigration policy, which would be much more restrictive than policies of the previous few decades:

We need a system that serves our needs, not the needs of others. Remember, under a Trump administration it’s called America first. Remember that.

To choose immigrants based on merit. Merit, skill, and proficiency. Doesn’t that sound nice? And to establish new immigration controls to boost wages and to ensure that open jobs are offered to American workers first.

It would also become the centerpiece of Trump’s inauguration address in January 2017:

Every decision on trade, on taxes, on immigration, on foreign affairs will be made to benefit American workers and American families. We must protect our borders from the ravages of other countries making our products, stealing our companies and destroying our jobs.

In addition to figuring prominently in his speeches, “America first” has turned up regularly in Trump’s tweets, often paired with his other favorite rallying cry, “Make America great again”.

As Trump’s critics have accurately observed, the president did not invent the phrase “America First,” nor was he the first public figure to sloganize it. More to the point, they say, many of the social and political contexts in which it has been used in the past were unsavory.

The Anti-Defamation League noted in an April 2016 statement urging Trump to reconsider his use of it that “America First” was associated before and during World War II with an isolationist political organization some of whose members openly displayed pro-Nazi and anti-Semitic tendencies:

The most noteworthy leader of the “America First Committee” was Charles Lindbergh, who sympathized with the Nazis and whose rhetoric was characterized by anti-Semitism and offensive stereotypes, including assertions that Jews posed a threat to the U.S. because of their influence in motion pictures, radio, the press, and the government.

“The undercurrents of anti-Semitism and bigotry that characterized the America First movement — including the assumption that Jews who opposed the movement had their own agenda and were not acting in America’s best interest — is fortunately not a major concern today,” said Jonathan A. Greenblatt, ADL CEO. “However, for many Americans, the term ‘America First’ will always be associated with and tainted by this history. In a political season that already has prompted a national conversation about civility and tolerance, choosing a call to action historically associated with incivility and intolerance seems ill-advised.”

Other Trump critics identify the slogan with the infamous white supremacist hate group the Ku Klux Klan, one of whose ex-leaders, David Duke, himself ran for public office in 2016 on an “America first” platform. Social media memes critical of Trump’s enthusiasm for the slogan use archival images and Klan memorabilia to make the point that its history is anything but innocuous.

Photo of KKK members marching with an “America first” banner dates from the 1920s and can be found in the Getty Images archive. The Ku Klux Klan “coin” (actually a token) bearing the slogans “America First” and “Preserve Racial Purity” on one face and “The Invisible Empire” on the other was struck in 1965 to celebrate the centennial of the KKK’s founding, numismatists say, although it was never officially endorsed by the organization.

“I stand for America first, last and always,” the speaker began. “I am opposed to any organization which tries to bring in foreign and alien ideals.”

Another variant is enshrined in an “Imperial Proclamation” submitted as evidence during a Congressional hearing on the Klan’s activities in 1921:

[The Klan] stands for America first — first in thought, first in affections, and first in the galaxy of nations. The Stars and Stripes forever above all other and every kind of government in the whole world.

Despite their embrace of the slogan, however, there is no evidence that the Ku Klux Klan invented it, as has sometimes been alleged. There are instances of its use by politicians predating any examples we’ve found directly attributable to the Klan.

President Woodrow Wilson ran for re-election on an “America first” platform in 1916, for example, in that instance using the phrase to remind voters that his isolationist stance had kept U.S. troops out of the burgeoning conflict in Europe (nevermind that he abandoned that position and sent them to fight in World War I during his second term). A popular song called “America First!” was dedicated to Wilson and published in 1917.

For that matter, Presidents Calvin Coolidge, Warren G. Harding, and William McKinley all used the catchphrase at one time or another to promote isolationist and/or protectionist foreign policies (we found an instance of McKinley being touted as having an “America first” agenda as long ago as 1896).

In sum, the political slogan “America First” has a pedigree stretching back more than a hundred years, with connotations ranging from anti-expansionism and trade protectionism to outright racism and anti-Semitism. Although it has been trumpeted over time by hate groups such as the Ku Klux Klan, its use does not automatically confer the most heinous of those attitudes on the user — although given its less savory associations, one wonders why any informed person would embrace it today.