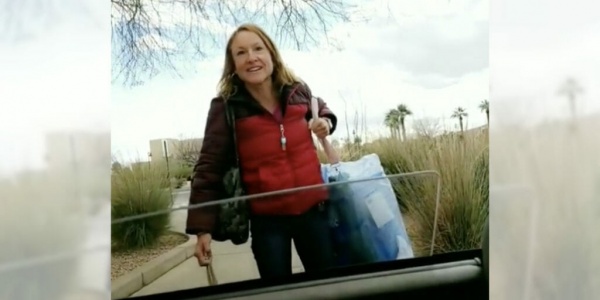 A white woman shouted racial slurs at a black man in Scottsdale before bafflingly telling him that she shot Tupac, according to a video of the incident posted by the man.

On Sunday, John Andrew Taylor had just finished dropping off his sister when he came upon the woman crossing the street. Taylor said the woman suddenly yelled toward him, "Fuck you, you n*gger." Taylor asked her to repeat herself.

"You heard me, you fucking n*igger," she repeated, according to Taylor. That's when he got out his phone and told the woman he was recording.

In the video, the woman can be seen snarling toward the camera while saying, "You motherfucker. Go for it you fucking n*gger piece of shit."

As Taylor turns the corner and the woman (dubbed by one Instagram commenter as "crosswalk Kathy") begins walking away, he says, "You have yourself a blessed day."

The woman turns back toward Taylor and starts walking in his direction, at one point appearing to say, "You're supposed to be in Oakland," before yelling the n-word again.

Taylor parks the car while saying, "Matter of fact, I'm going to take the time for this one." While rolling down the window, he asks, "What was that? You said I'm a what?"

The woman proclaims, "Tupac is dead. I killed him. I put a bullet through the fucker’s head."

"Did you?" Taylor responds.

"I sure did. He is a dead fucking n*gger. He is an ugly fucking homosexual rapist fucking n*gger. Just like you, fucker," the woman responds while pointing in Taylor's direction, clutching a Fry's grocery bag with her other fingers.

As the woman walks off, Taylor turns the camera on him, laughing, and says, "And that's how you make someone famous."

Speaking with Phoenix New Times on the phone, Taylor said he experiences racism every day, but never as blatantly as he did in the incident captured in the video.

"I was shocked," Taylor said. "I have never in my life had someone had the gumption and the audacity to come out and say something like this. Not directly to my face, at least."

As the woman hurled the n-word his way, Taylor thought of something his mother used to say: "Never look like what you’re going through."

"What she meant by that is, if you’re going through trials and tribulations on the outside, if you’re hurting, put a smile on," he said. "You can make it through anything. Even if it is killing you on the inside, don’t let it show."

That's what explained his smile in the video, Taylor said.

Asked about the woman's bizarre claim to Tupac's murder, Taylor said, “I’m not going to lie, I thought that was hilarious."

While it was happening, Taylor thought, "First of all, we are in Scottsdale, Arizona."

Then, being a big Tupac fan, Taylor remembered that Tupac was shot in the chest, not the head, as the woman had claimed. "She must not know too much about what she’s talking about."

Taylor, who said he served in the Army, said he did not report the incident to the police.

"That lady had every right to say what she did say. While I was in the military, that’s what I fought to protect," he said.

As for making the woman famous, by Monday, Taylor's video was on the front page of Reddit.