'Get Out My Country': Woman Goes Berserk On Restaurant Manager For Speaking Spanish 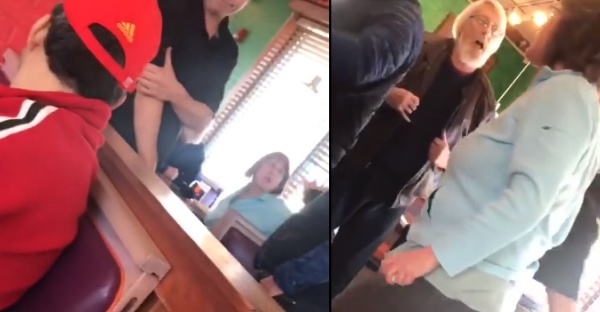 A white woman at a Mexican restaurant yelled at the manager for speaking Spanish before launching into a tirade that was shouted down as racist and xenophobic, video originally posted to Facebook over the weekend shows.

The incident occurred at the Tampico Mexican Restaurant in Petersburg, West Virginia. In the footage, a woman–identified by her male companion as Jill–erupts after manager Sergio Budar addressed two employees in Spanish.

“I lived in California for 20 years,” Jill says. “English is our first language, so you need to speak English.”

Budar is apologetic throughout the encounter and immediately apologized after the woman’s first complaint.

Well, I’m sorry about you too. Get the fuck out of my country.

The clientele responds with a collective wince and raising of the eyebrows. At least one patron says, “Wow.”

Budar then repeatedly and patiently explains that he is a U.S. citizen. Jill isn’t buying it and says she doesn’t believe him. Another man then tells Jill that she needs to leave because she’s being racist.

Others then join in and Jill’s friend advises her to stop talking.

Eventually, the couple begins to leave after Budar offers to pay for their meal in order to get them out of his restaurant. On their way out, however, Jill attempts to get in Budar’s face and tries to throw something at him but is stopped by her bearded companion.

“I got raped by illegal aliens, but you can’t speak English, and you want me to be nice to you,” Jill shouts as her friend pushes her away from Budar.

The woman who published the video on Saturday went by Irma Dleon on her account. She said that everyone in the restaurant was okay after the incident.

“My daughter captured this situation while working,” she wrote in her original post. “My poor baby was frightened but cannot believe this continues to happen. We should be united as a country but there is much hate. We are all human trying to help each other out. I will pray for this woman to be a better person, but you can only educate the ignorant. First, they must listen.”

Law&Crime reached out to the restaurant and we received confirmation that the ugly incident occurred.