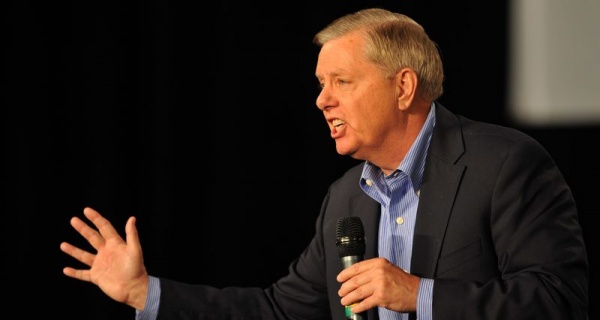 Date Posted: Sunday, February 17th, 2019
South Carolina’s senior Senator Lindsey Graham visited Face the Nation Sunday morning and told host Margaret Brennan that President Trump’s border wall is more important for kids than building schools. When Brennan told him funding could be pulled from constructing a new middle school in Kentucky and diverted to fund the wall, Graham responded, “I would say it’s better for the middle school kids in Kentucky to have a secure border…right now we’ve got a national emergency on our hands.”

Of course, Graham knows there is no real emergency, the President admitted as much when he said, “I didn’t need to do this,” at his national emergency declaration press conference on Friday. But none of that matters to Graham.

We’ve known for some time now that Graham has gone full Trump. At this point, it’s a safe bet that he cuddles up with a Trumpy Bear before falling asleep at night. It’s a stunning reversal from a man who considered as a close friend the now-deceased Senator John McCain, a staunch enemy of Trump, not to mention the many times Graham himself called then-candidate Trump every name in the book.

Back in October, the Washington Post put together a video showing a “best of” of sorts showing Graham’s shifting positions on Trump. That should have, at the very least, halted most rational media from covering anything he has to say regarding Trump. It’s clear Graham is, and likely has always been, all about his own political expediency, whether it was when he was trying to reach the highest office in the land, or now while attempting to make sure he holds his Senate seat—even, seemingly, at the expense of middle school kids.

One can only surmise Graham has concluded that the only way he won’t get primaried while running for reelection in 2020 was to sidle up to Trump. But the aggressive way in which the senator has gone about it is still stunning and somewhat laughable. He’s gone so far as to change his Twitter profile photo to one that includes Brett Kavanaugh and himself.

There was a time, not long ago, that even if you disagreed with Graham’s positions on an array of issues, he seemed to come across as a serious thinker, a foreign policy wonk and someone who cared about issues. But the new and not improved version of Graham now resides in the Louie Gohmert camp, and Sunday morning news shows should treat him as such.
Watch the video below: