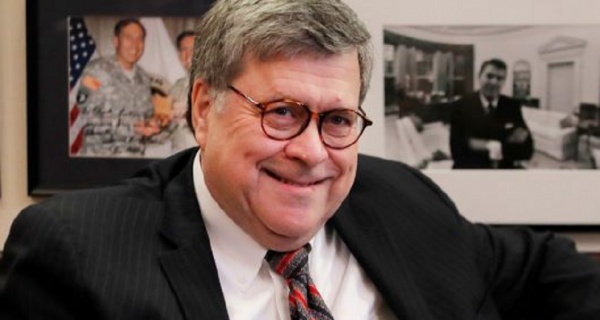 Later today, William Barr is expected to be confirmed as Donald Trump’s next attorney general, despite just three Democrats voting to advance his nomination earlier this week. But the Barr family is intent on gaining the nation’s trust. In order to avoid any thorny work situations, Barr’s son-in-law, Tyler McGaughey, will be leaving his job in the Justice Department . . . for a new gig that will seemingly provide even more opportunities for conflicts of interest, this time of the Russian variety!

CNN reports that McGaughey, the husband of Barr’s youngest daughter, has been hired as an attorney in the White House counsel’s office, where he’ll “advise the president, the executive office, and White House staff on legal issues concerning the president and the presidency.” While the division is separate from the legal team that defends Trump in the Russia investigation—a group of leading lights that includes Rudy “maybe there was collusion” Giuliani—its work nevertheless does “intersect with the investigation.” (Trump reportedly blamed former White House counsel Don McGahn for failing to bring the probe to a close.) Meanwhile, Mary Daly, Barr’s oldest daughter, will be leaving her current job in the deputy attorney general’s office for a gig at the Financial Crimes Enforcement Network (FinCEN), which has had its own Russian intrigues.

Barr, of course, has his own special conflicts of interest when it comes to Robert Mueller’s probe. Last June, he sent an unsolicited 20-page memo to the Justice Department calling the inquiry into potential obstruction of justice by Trump “fatally misconceived” and Mueller’s actions “grossly irresponsible,” and insisting “Mueller should not be permitted to demand that the President submit to interrogation about alleged obstruction.” (Presumably, the memo didn’t hurt Barr’s position on the short list to replace the long-suffering Jeff Sessions.) While Barr said in January that he would not end the Mueller inquiry without cause if asked to do so by the president, he also told lawmakers he saw no reason to recuse himself in light of the memo, saying he would “seek the counsel of Justice Department ethics officials” but would not necessarily take their advice.

Walter Shaub, the former director of the Office of Government Ethics, said it was a “good idea” for McGaughey and Daly to leave the D.O.J., but added that McGaughey’s beeline for the White House was “concerning.” “That’s troubling because it raises further questions about Barr's independence,” he told CNN.