Chuck Schumer Is Recruiting A Candidate To Defeat Mitch McConnell 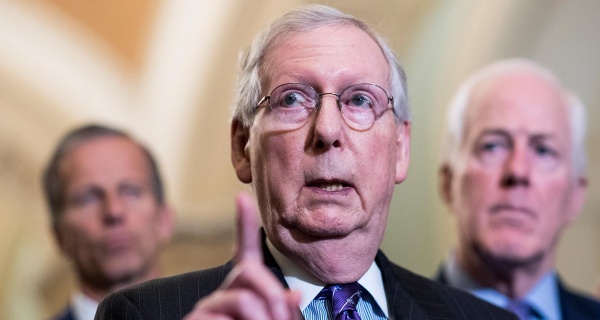 Schumer met with Amy McGrath, a Marine veteran-turned 2018 congressional candidate, at Democratic Party headquarters last month to pitch her on running against McConnell. McGrath listened and didn’t rule it out. The Democratic leader first contacted McGrath in December.

McConnell, the longest-serving Senate GOP leader, is gearing up for a reelection fight and leaving little to chance. His political team has begun compiling opposition research on McGrath and delving into tracking footage of her. On Wednesday, senior Republican Party officials involved with a pro-McConnell super PAC will meet in Washington to begin mapping out a potential campaign against McGrath.

Schumer and McConnell have long clashed as rival Senate leaders. Schumer’s attempt to recruit a candidate to fight him is his latest and boldest blow yet.

McGrath, the first woman to fly in an F/A-18 in a combat mission for the Marines, first gained national notoriety for a political ad entitled “Told Me,” enumerating the glass ceilings she shattered as a woman in combat.

If she does decide to throw her hat in the ring, McGrath will be in for a challenge. Her narrow loss against Rep. Andy Barr in a deeply conservative district revealed her to be a worthy opponent for any Republican, but McConnell, who has served in the Senate since 1985, will have the advantage of an extremely red electorate that presumably likes the power he brings their state. He defeated his 2014 challenger, Kentucky Secretary of State Alison Lundergan Grimes, by 16 points.

McGrath’s one advantage: McConnell is not well-liked by his constituents. In fact, he is the least-popular currently sitting senator.

Kentucky will be a battleground even before 2020, with a competitive gubernatorial race coming up this year. Republican Gov. Matt Bevin is suffering from toxic poll numbers, and Democrats have a deep bench of declared challengers including state Attorney General Andy Beshear, state House Minority Leader Rocky Adkins, and former state auditor Adam Edelen.