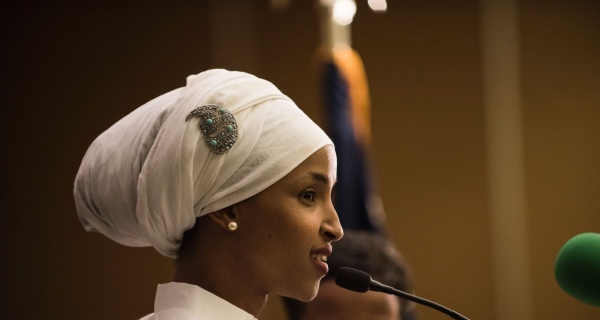 First, she was “Ilhan `Get the hijab done’ Omar.” Portrayed by a comic actress on Saturday Night Live curling her biceps, scaling the side of a building with her bare hands and boasting about being a “proud Muslim woman and a proud American.”

Hours after the SNL spoof, one of the highest-profile members of the House freshman class was in the middle of a firestorm for a tweet that House Democratic leaders rebuked for its “anti-Semitic tropes.”

Omar apologized Monday. But she also sent a message that she would not be cowed.

“Listening and learning, but standing strong,” Omar said in a tweet that was punctuated by an emoji of a flexed bicep.

On Wednesday, she punched back, throwing the charge of prejudice at President Donald Trump.

"You have trafficked in hate your whole life – against Jews, Muslims, Indigenous, immigrants, black people and more," she tweeted. "I learned from people impacted by my words. When will you?"

Her tweet followed Trump's call for her to resign and Vice President Mike Pence's tweet that she should face consequences for her words.

Even before the controversy, Omar – along with Reps. Rashida Tlaib and Alexandria Ocasio-Cortez – received an outsized share of the attention of the new members of Congress.

They represent the fresh voices, diversity and progressive energy of the Democratic class, celebrated in the Saturday Night Live skit on the “Women of Congress” that included all three lawmakers.

"I think that’s a pretty accurate portrayal," said Andrew Johnson, a Minneapolis city council member whom Omar previously worked for as a policy aide and campaign manager. "Ilhan is not somebody who is going to be told to keep quiet. She’s a strong, independent leader."

But Republicans are quick to pounce on her stumbles, hoping that helps them paint the Democratic Party as scary radicals

“House Dems have gone CrAzY!” the campaign arm of House Republicans said in one of the many criticisms of Omar and her cohorts unleashed in recent weeks.

President Donald Trump, who Democrats argue has not been held accountable for comments like “Islam hates us,” said Tuesday that Omar should resign from Congress or at least step down from the House Foreign Affairs Committee.

"Her lame apology – and that's what it was; it was lame, and she didn’t mean a word of it – was just not appropriate," Trump said.

Omar’s election was seen in part as a rebuke to Trump and his controversial order limiting travel into the United States from several countries – most of them majority-Muslim. After fleeing civil-war torn Somalia with her family when she was eight, Omar spent four years in a refugee camp before moving to the United States. She has said she gained her interest in politics from interpreting for her grandfather at Democratic-Farmer-Labor meetings in Minneapolis.

“This new diversity creates some uncomfortableness,” Omar said last week during remarks on “reclaiming religious freedom” at the liberal Center for American Progress. “Oftentimes, as a society, when we are the most uncomfortable is when real shift happens.”

Besides being one of the first two Muslim women in Congress, the Minnesotan is also the first to wear a hijab on the House floor and the first Somali American and first naturalized citizen from Africa to serve in Congress.

“People just add on extra `firsts' that are not real,” Omar joked to Trevor Noah in a recent appearance on "The Daily Show."

That was not her first appearance on the show. She’d already received extensive media coverage, including a 2017 cover of Time magazine, before coming to Washington. The documentary “Time for Ilhan,” which premiered last year, chronicles the former community organizer’s 2016 election to the state legislature. She was not only the first Somali American elected to a state legislature, but she also beat one of her party's longest-serving members to win the nomination.

Johnson, the Minneapolis city council member, said he knew she was unique when he first hired her to run his own campaign. It's only the speed at which she jumped onto the national stage that's been surprising.

"She was, and is, a reaction to Donald Trump," Johnson said. "In many ways, the times picked her."

In January, she signed a deal to publish a memoir entitled "This is what America Looks Like."

That was also her response in December to conservator pastor and commentator E. W. Jackson who complained that Congress “is now going to look like an Islamic republic” after Democrats lifted a ban on wearing head coverings on the House floor to accommodate Omar’s hijab.

“Well sir, the floor of Congress is going to look like America,” she tweeted. “And you’re gonna have to just deal.”

At an event in January announcing the introduction of legislation to repeal Trump’s travel ban, Omar noted that she’s one of the few people in positions of power who are affected by the ban.

Any legislation to block the ban that passes the Democratic-controlled House would likely get stopped in the GOP-controlled Senate. But Hoda Hawa, director of the Washington office of the Muslim Public Affairs Council, said that Omar’s and Tlaib's elections to Congress show progress.

“That, in itself, I would count as a success,” Hawa said.

Omar and Tlaib are both advocates for top progressive priorities such as a single-payer health care system and the Green New Deal recently unveiled by Ocasio-Cortez – fodder for the GOP campaign to cast them as socialists.

“If you look at the new crop of Democrats, many of them are from purple districts. But the reality is that the more outspoken members of the new caucus are more progressive than your average new Democratic member,” said Democratic strategist Brad Bannon. “There’s going to be tension.”

In fact, more than two dozen Democrats – many from competitive districts – sent a letter to House leaders this week asking them to address and condemn "recent anti-Semitic rhetoric."

Omar and Tlaib were already under pressure for their pushback against Israel. Tlaib, who still has relatives in Palestine, wants to take lawmakers to the Israeli-occupied West Bank to counter regular trips to Israel paid for by the education arm of the American Israel Public Affairs Committee.

Both Tlaib and Omar support applying economic pressure to change Israeli policy towards the Palestinian population.

"It's a little frustrating because those two get more press attention than everyone else combined," Ann Lewis, co-chair of the newly-formed Democratic Majority for Israel recently told The Forward.

She’d already apologized for tweeting in 2012 that Israel had “hypnotized the world,” her reaction to a resurgence of the longstanding conflict between Israel and the Palestinian group Hamas.

Democratic leaders had stood by Omar, rejecting Republican charges of anti-Semitism. That changed when Omar tweeted about the influence of the American Israel Public Affairs Committee in a way that fellow Democrats said used offensive anti-Semitic tropes and "prejudicial accusations about Israel’s supporters."

“It’s all about the Benjamins baby,” she tweeted.

She "unequivocally apologized," but still reaffirmed "the problematic role of lobbyists in our politics, whether it be AIPAC, the NRA or the fossil fuel industry."

The fact that Omar apologized demonstrates that she realizes there’s a learning curve in terms of public discourse, said Peter Gottschalk, a religion professor at Wesleyan University who has written about Islamophobia.

In criticizing Omar, Republicans are trying to take advantage of any threads of anti-Semitism within the Democratic Party, said Nathan Gonzales, editor and publisher of Inside Elections.

“But I’m skeptical that that’s going to be a broader winning issue,” he said.

He sees Ocasio-Cortez as the more sustainable boogeyman for Republicans.

“She just checks off so many boxes that inflame Republicans,” Gonzales said.

When Omar appeared recently on "The Daily Show," Noah asked her about whether there’s a fear that she, Tlaib and Ocasio-Cortez are troublemakers who are “here to cause chaos.”

Omar responded that she and her colleagues are ready “to throw down on behalf of the American people.” And she appeared to enjoy the suggestion that she's threatening to some people.

“They could hear us," she said, as the audience cheered, "coming from afar."