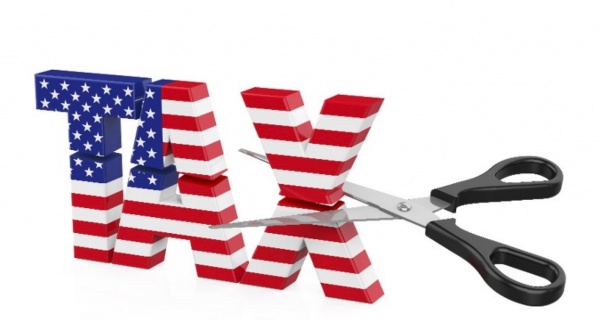 The Republican tax cut is the gift that keeps on giving ... to Democrats.

The 2017 law was supposed to boost workers' wages, create jobs, and drive more investment — and as we've known for awhile, it's done none of that. But now we can add two more failures to the creatively-named Tax Cuts and Jobs Act (TCJA): It hasn't encouraged corporations to return their profits from overseas, and it's probably hiding a nasty surprise for many Americans come tax season.

Let's start with the second idea. Lots of Americans work for an employer who sends them regular paychecks. Those employers rely on tables published by the Internal Revenue Service (IRS) to guesstimate how much their employees owe in taxes each year. Then they withhold the necessary increments from each paycheck. Come tax season, every worker settles up with the government. If their employer withheld too little, they pay the remainder. If the employer withheld too much, they get a refund from the IRS. As Matt Yglesias pointed out, the system has traditionally overdone withholding on purpose — roughly three-fourths of tax filers usually get a refund.

But the TCJA rejiggered a ton of deductions in the tax code. Updating the tables accordingly fell to the Treasury Department and the IRS, even though the latter is also dealing with staff reductions and budget cuts.

Tax day isn't until April, but the average refund is already down more than 8 percent compared to last year. Anecdotal evidence is also rolling in that people who expected refunds are getting hit with extra tax bills instead. An intrepid Twitter user even compiled a collection of Trump supporters doing their taxes and discovering, to their horror, that their year-end tax bill went up.

At a minimum, the agencies were given a pressing logistical task they had too little time or resources to handle. But David Dayen also pointed to evidence the Trump administration actively pressured Treasury and the IRS to undershoot withholding estimates. In January 2018, Politico reported that the IRS was "under pressure to take as little as possible so people will see big increases in their take-home pay," and annoyed Democratic senators were looking into the matter. The Congressional Budget Office also expects withholding to be unusually low this year.

If the White House did this, the point was to boost paychecks in the immediate aftermath of the TCJA's passage, so Trump and the Republicans would get political credit in the run-up to the 2018 midterms. "You're going to start seeing a lot more money in your paycheck," Trump crowed in a speech shortly after signing the bill.

Unfortunately for the president, most Americans are much more likely to notice a big one-time check — or the absence of that check — than an incremental increase on payday. "Ask people how much they paid in taxes, nobody knows," Howard Gleckman, a senior fellow at the Tax Policy Center, told Dayen. "Ask them how much they got in their refund, people know." Worse, if tax refunds come in systemically lower, that could impact consumer spending in 2019 — and thus economic growth.

We won't know how extensive the problem was until after April — if inadequate withholding was simply redistributed across the population, or if it increased on net. But the Government Accountability Office already concluded that treasury and the IRS didn't do a good job documenting how they estimated the new withholding tables. At best, the Trump administration bungled the practical implementation of its key tax package. At worst, it sloppily tried to manipulate Americans' paychecks for a short-term political win and wound up with egg on its face.

Now, what about that whole corporate profits business?

You might recall that another selling point for the TCJA was that it would encourage corporations to bring profits back to the U.S. from overseas. Over recent decades, a combination of factors in the tax code has allowed companies to indefinitely park enormous piles of cash offshore — a combined $3 trillion, by many estimates. Ostensibly, if they ever claimed those profits state-side, they'd get taxed. But there was never a real need for big business to do so, and the money continued to float out in the international aether, except for whenever Congress gave the corporations a temporary tax holiday.

The idea behind the TCJA was that lowering the overall U.S corporate tax rate to be more "competitive" with other countries would remove the incentive for companies to do this. Throw in a few other wonky fixes, plus one more temporary tax holiday, and all that money was supposed to come flooding back. That, in turn, would mean more investment, wages, jobs, etc. "I would think that everybody would want these companies to bring the money back here to hire more workers and create more jobs in America," as Senate Majority Whip John Cornyn (R-Texas) put it at the time.

As you may have guessed, it didn't work out that way.

First off, plenty of major "tax haven" countries have corporate rates well below the TCJA’s topline 21 percent. Second, the "global minimum" rate the TCJA applied to punish companies that keep profits offshore is only 10.5 percent. Third, the bill actually includes a loophole whereby investments in factories, equipment, and other operations abroad can be written off entirely.

You can debate whether this was deception on the GOP's part or sloppiness resulting from a hastily written bill. Regardless, the result is that nothing has changed. "The global distribution of corporations' offshore profits — our best measure of their tax avoidance gymnastics — hasn't budged from the prevailing trend," Brad Setser just pointed out in The New York Times. But revenue from the corporate profits tax did fall by 31 percent this year.

What's the takeaway from these two developments?

The Republicans, supposedly the green-eyeshade party that Americans trust to handle the economy, are at best a pack of incompetents and at worst a gang of swindlers. Their landmark tax overhaul, supposedly the pinnacle of their efforts, is an incoherent and contradictory mess. And its results keep getting worse and worse.