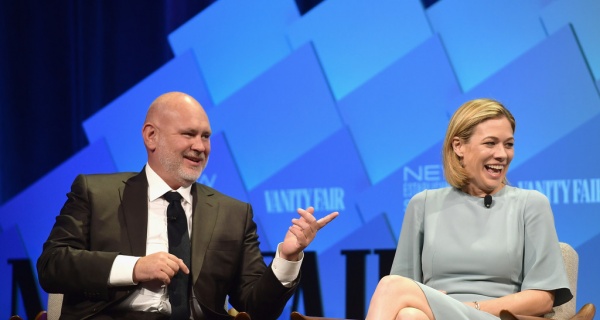 Anti-Trump strategist and pundit Steve Schmidt is feeling the heat from all sides since his client, Starbucks founder Howard Schultz, announced on 60 Minutes that he might run for president as an independent. The reaction from Democrats and anti-Trump Republicans was overwhelmingly negative, putting Schmidt on the defensive and costing him his MSNBC punditry perch as long as he is advising Schultz on entering the race in 2020.

Anybody who has watched Schmidt on MSNBC, or saw the portrayal of him in the 2012 HBO movie Game Change, knows that he operates on a pretty short fuse. Just how short, his two longtime friends and podcast partners, Adam Levine and Elise Jordan, found out when they sat down last Tuesday to interview him on their show Words Matter about Schultz’ just announced potential presidential bid and Schmidt’s role as the chief adviser to the Starbucks founder in it.

Jordan, an alum of the George W. Bush White House and the Rand Paul presidential campaign, outlined the ground rules that everything would be on the record, and that Schmidt would be treated no differently than any other guest even though he was a founder of Words Matter, along with Jordan and Levine, another Bush veteran and media pro who’d worked with NBC superstar Tim Russert. Things were tense. Schmidt had said that he wouldn’t be involved in any presidential campaign, but that he would be leading a 501c4 dedicated to building a third party movement funded by Schultz, “movement” being the keyword in their mind. He gave no heads-up to Jordan and Levine about Schultz’s announcement.

Schmidt railed at having to defend himself on his podcast with a stream of curses a source present in the studio said consumed six minutes. Told that listeners were castigating him for joining an effort that could help re-elect President Trump and that he owed them answers, Schmidt finally settled down enough to take about 30 minutes to answer questions from Jordan, normally his co-host, and Levine, the executive producer.

Listening to the episode, which will be available on iTunes and elsewhere Monday morning, they give Schmidt a forum to discuss “the sickness in the system” that gave rise to Trump, and his puzzlement at the “hysteria” of the reaction to Schultz testing the waters.

“This is not Trumpistan,” Schmidt says since everyone has the right to run for president and this isn’t even a campaign, but so far a “speculative effort.”

Levine presses him on how Schultz could get to 270 electoral votes. Name me one state, give me three or four that he could carry, Levine says. Schmidt ducks the question, says it’s premature, and claims without any evidence that an independent candidacy could open up “multiple pathways” to 270. He says Schultz is already at 18 percent against the Democrats’ Big Three: Sens. Bernie Sanders, Elizabeth Warren, and Kamala Harris.

That prompts Levine to ask the question that evidently hits a nerve. “Will Derek Jeter or another athlete not hit another home run because they’re going to get taxed at 70? What’s the economic behavior that he thinks is anti-growth, other than his own pocket?”

“This is bullshit,” Schmidt exclaims. “I’m not doing this.”

“Steve, you’ve got to answer the questions,” Levine says.

“I’m not,” and with that Schmidt slams down his headset and abruptly ends the interview. He threatened legal action against the studio if the interview airs, according to a source involved in the discussion. When his legal threat failed, he offered to buy the recording, according to the source. The studio refused.

Schmidt told The Daily Beast, “My objection is not on a tough question. It’s the surreality of having a podcast hijacked from me. Until this recording, I had always thought this was Elise’s and my podcast.”

Levine told The Daily Beast that the podcast will continue but that Schmidt will no longer be involved with the podcast or the company, Words Matter, which takes its name from an expression Russert used with particularly evasive guests.

“I think he thought it would be a softball interview,” Levine says of Schmidt “I love him, I hope he’s OK, but what he did is antithetical to the mission of Words Matter. After everything he said about Donald Trump in the past two years, he’s part of an effort that could lead to Trump’s reelection.”

Despite the dust-up, Jordan told The Daily Beast it is "a sad day in 2019 when a female co-host who is supposed to be an equal partner in a business is cut out of a key decision."

Asked for his response, Levine then emailed “Elise wanted to interview Steve on this topic and we collaborated on the interview, and the last time I spoke to her she was fully supportive of the interview going out, so I don't know what key decision she is referring to. As far as my position in the company, I am the founder and executive producer of the podcast and have been since Day 1.”

Hours later, Jordan—who later said the key decision she'd been referring to was Levine naming himself founder and CEO—tweeted Friday evening that she was also leaving Words Matter:

@Elise_Jordan
I am so grateful to everyone who listened to the Words Matter @WMM_podcast. Unfortunately, I have decided to step away from the company Steve and I co-founded but hope we return soon on a new platform.

Words Matter launched last August as the center-right’s answer to Pod Save America, the progressive podcast launched by alums of the Obama administration. At the time, Schmidt told Vanity Fair that he thought the conservative movement, and by extension, the Republican Party, which he’d left two months earlier, had become “a racket.” Every episode begins with a quote from Daniel Patrick Moynihan, another of Levine’s heroes, that “Everyone is entitled to an opinion, but not their own facts.”