Too Dumb To Be True! Ivanka Says She Is Not Worried About Mueller 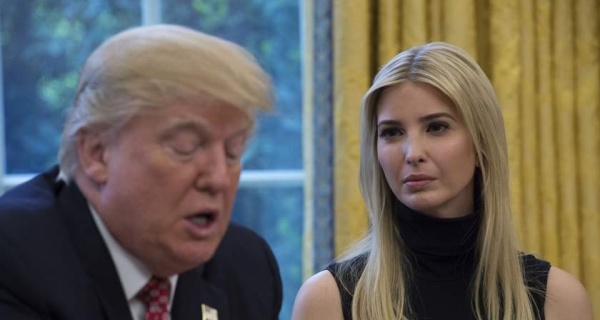 Date Posted: Friday, February 8th, 2019
Donald Trump's daughter and White House adviser Ivanka Trump says she “barely" knew about the prospective Moscow deal that the Trump Organization pursued while Trump was also running for president, downplaying the significance of the project’s exploration.
“Literally almost nothing,” Ivanka Trump said of her knowledge of the prospective deal. “We were an active business.”
“There was never a binding contract. I never talked to the -- with a third party outside of the organization about it. It was one of -- I mean we could have had 40 or 50 deals like that, that were floating around, that somebody was looking at. Nobody visited it to see if it was worth our time. So this was not exactly like an advanced project," the president's eldest daughter said.
Trump further downplayed the significance of doing business in Russia, noting that other major hotel chains also have properties there.
The plan for the Moscow project, according to Felix Sater who raised money for developments on behalf of the Trump Organization, was to make the tower the world's tallest building.
“It’s not like it's a strange thing, as a hospitality company or a development company, to have a hotel or a property in Russia. We're not talking about Iran. It was Russia. And we weren't even advanced enough that anyone had even visited the prospective project site. So it really was just a non-factor in our minds. I'm not sure that anyone would have thought of it," she added.
As a then-candidate, Trump repeatedly denied that he had any dealing with Russia.
“First of all, I don’t know Putin, have no business whatsoever with Russia, have nothing to do with Russia,” Trump said at a campaign rally in Kinston, North Carolina, on Oct. 26, 2016.
Asked if she has any concerns about any of her loved ones being entangled in the ongoing Mueller probe investigating potential collusion between the Trump campaign and Russia, Ivanka Trump said she has no concerns.
“Are you concerned about anyone in your life that you love being involved?” ABC's Abby Huntsman, co-host of "The View," asked.

“I'm not. I'm really not,” Trump said.
Asked about the leaks that have come from the White House, Trump said she “can’t explain” why there are people working for her father with an apparent agenda to leak embarrassing and damaging information but says she knows who some of the leakers are.
“Why are they still there?” Huntsman pressed.
“Some of them are not here,” Trump replied with a laugh.
She also expressed her support for broad immigration reform.
“I think this country, though, whether you're a Democrat or Republican, can come together around the idea of comprehensive immigration reform,” Trump said. “This is one that both parties recognize is -- problematic, that we have a deeply flawed immigration system. And there needs to be a fix for it.”
When a contingent of Democratic women in Congress stood up to cheer during the president’s State of the Union address as he heralded the economic progress of women, Trump said she thought it was a “beautiful moment.”
“So you don't think they were there clapping against him?” Huntsman inquired.
“Well, I think they were proud of themselves, as they should be. Everyone fought a hard race. And -- and they won. They -- they earned their seat at the State of the Union. And I think we should always celebrate the inclusion of more voices in Congress,” she said.
Of House Speaker Nancy Pelosi, who has so far blocked the president from securing any of his demanded funds for a border wall, Trump said she’s a “formidable” leader.
“She is a formidable speaker. And she is a formidable politician. And she has been for a long time,” Trump said.
Asked why she didn’t speak out publicly during the height of the administration’s zero-tolerance immigration policy that resulted in the separation of migrant children from their parents, Trump said it is not her job “to share my viewpoint when they diverge.”
Trump further explained: “I think that when you hear me start to speak publicly on an issue that's active, it's because my voice isn't being heard privately.”
Asked about an art exhibit in Washington, D.C., that essentially invites people to throw crumbs at a model that resembles a vacuuming Ivanka Trump, Trump called the exhibit “a very sexist representation of a woman.”
“What bothered me about this image ... is that they hired a 16-year-old girl. I don't know what her situation is. But they hired this model to stand there and have crumbs thrown at her for two hours a day for a couple of months. So I have a real problem with that ... and that was what infuriated me, more than anything,” she said.
Asked what women inspire her, Trump said she’s most motivated by the women she meets as she travels the country juggling a home and work balance to provide for their families.
“The women who really I think about and that motivate me to leave my kids early in the morning and miss a whole lot of dinners at home, are -- the women I meet when I travel,” Trump said. “I was in Texas recently, and talking to a woman who had a two-hour bus commute to get to a job that she had to wait three hours before it started because that was the only bus that would take her there. And she was so excited to have this opportunity to provide for her family.”