'MAGA Cop' Who Blamed Tamir Rice For Being Shot Is Promoted 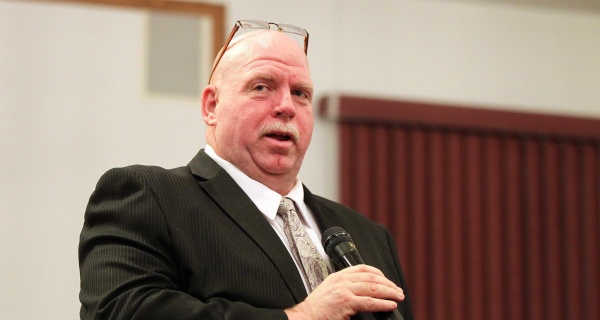 Date Posted: Wednesday, February 6th, 2019
Steve Loomis is trash.
After a Cleveland, Ohio, police officer shot and killed 12-year-old Tamir Rice for the unconscionable crime of playing with a toy gun in a park, Loomis blamed Rice, saying, “Tamir Rice is in the wrong...He’s menacing. He’s 5-feet-7, 191 pounds. He wasn’t that little kid you’re seeing in pictures. He’s a 12-year-old in an adult body,” according to Politico.
As president of the Cleveland Police Patrolmen’s Association, Loomis issued a statement after Rice’s family received a settlement in a wrongful death suit, saying he hoped Rice’s family used the $6 million to educate children about firearms. And when Timothy Loehmann, the officer who shot Rice, was fired and his partner suspended, Loomis said that his police union “wouldn’t stand for it,” insisting the two officers “didn’t do anything wrong.”
The carbohydrate-consuming top cop even called Cleveland Browns player Andrew Hawkins “pathetic” for wearing a “Justice for Tamir Rice” T-shirt, according to Cleveland.com. The former union chief also used his position to stop Cleveland officers from carrying the flag at any football game where players knelt during the national anthem.
“It’s just ignorant for someone to do that,” Loomis said after Browns players knelt during a preseason game. “It just defies logic to me. The fact that management was aware of what they planned on doing, that’s as offensive as it can get.”
Loomis, an official MAGA cop, came under fire for wearing his police uniform to a Donald Trump rally and frequently appeared on Fox News whenever Milwaukee Sheriff David Clark couldn’t appear to bash the Black Lives Matter movement. He was finally ousted from his position atop the police officers’ union by Cleveland’s Black Shield, a group of black cops that was tired of his nonstop, anti-black rhetoric.
And now that Steve Loomis has apparently eaten all the Infinity Doughnuts, Cleveland.com is reporting that Krispy Kreme Thanos is getting a new role at the Cleveland Police Department on Monday as one of three detectives moving into the homicide unit. That’s right. The Trump-supporting, First Amendment-hating, anti-protest police officer who believes there isn’t “anything wrong” with shooting a 12-year-old but believes there is something wrong with asking for justice for bullet-riddled 12-year-olds will now be investigating homicides.
There’s something wrong with that.
Let’s recap: The Cleveland Police Department once hired a police officer who “could not follow simple directions, could not communicate clear thoughts nor recollections,” and whose “handgun performance was dismal.” That officer killed Tamir Rice. And now they’ve put the man whose job it was to protect those kinds of officers at any cost in the homicide unit.