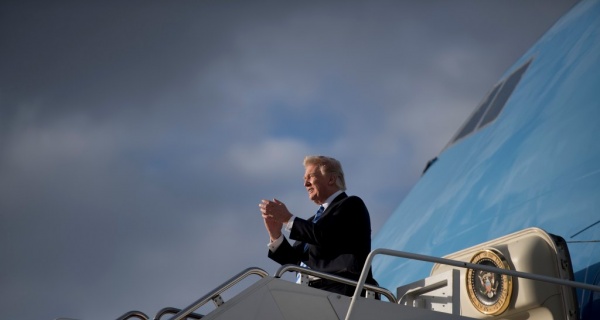 Date Posted: Wednesday, February 6th, 2019
President Trump and his entourage cost taxpayers a combined $13.6 million for just four trips over one month to his private Mar-a-Lago resort, according to a new report from the Government Accountability Office.
From February 3 to March 7, 2017, Trump visited his private resort in south Florida four different times. That cost government agencies approximately $10.6 million for operating costs of government aircraft and boats and $3 million for temporary duty costs of government personnel supporting Trump’s travel, according to the report.
The GAO, a nonpartisan government watchdog that works as Congress’s investigative arm, found that the government paid about $60,000 to the Mar-a-Lago directly in these four trips, money that goes towards further enriching the Trump family.
The watchdog said the trip costs detailed in the report were approximate because the White House refused to respond to requests for information about travel.
The trips to Mar-a-Lago included a trip south to watch the Super Bowl at the resort and another that included an official summit with Japanese Prime Minister Shinzo Abe. That trip was likely more expensive, as it required more total security.
These trips occurred over 15 total days, but Trump has spent 84 total days at Mar-a-Lago in his presidency so far, including three days this past weekend. The costs can’t be directly extrapolated since travel days are significantly more expensive, but if these numbers carried through the government would have spent roughly $77 million total for Trump’s frequent Mar-a-Lago visits.
That estimate doesn’t include his trips to other Trump properties. As of the end of 2018, according to NBC news, Trump had spent 222 of his 746 days as president at one of his properties.
Those aren’t the only government costs of Trump family travel the report explored. A trio of trips by Eric Trump and Donald Trump Jr. that were conducted for Trump Organization business cost taxpayers an additional $400,000 in Secret Service protection and other costs, the GAO found. That includes trips by Eric Trump to Uruguay and the Dominican Republic and a trip by both brothers and their spouses to the United Arab Emirates.