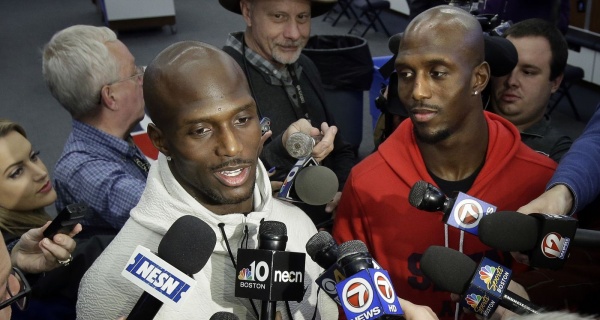 Date Posted: Tuesday, February 5th, 2019
It didn’t take long for members of the Patriots to start fielding the question that has become inevitable for champions: Will you visit Donald Trump’s White House?
Some of them have already made it clear they won’t. Twins Devin and Jason McCourty told reporters on Monday that they would be skipping the trip if invited by the president. Devin was adamant about staying away, while Jason was more diplomatic at first.
"I haven't thought about it, but I highly doubt it," he said. Then his brother prodded him a bit and Jason said there was almost no chance he would go.
Safety Duron Harmon also won’t be making the trip, according to TMZ Sports.
“They don’t want me in the White House,” he told the site.
Watch below:
Considering Trump has consistently been praiseworthy of the Patriots, an invite to the White House will most likely be forthcoming. The president has a relationship with Robert Kraft and QB Tom Brady, whom Trump has called a friend.
The last time New England won the Super Bowl, 34 players showed up. Brady was not one of them, citing family matters as the reason for his absence. The six-time Super Bowl winner has not commented yet on what he will do this year, should the president host the Patriots again.
President Trump, who often boasts about his so-called friendship with Kraft and Brady, as of Monday had not yet congratulated the team on its title via Twitter, his favorite medium. He did, however, fire off a tweet on Super Bowl Sunday about Tiger Woods.
“Tiger is back & will be winning Majors again!” the President wrote, in part.
Clemson visited the White House last month and players were served fast food. The president footed the bill, which he made sure to tell reporters.
The NBA champion Warriors did not visit the White House, and had a private visit with former president Barack Obama instead when they traveled to Washington to play the Wizards.