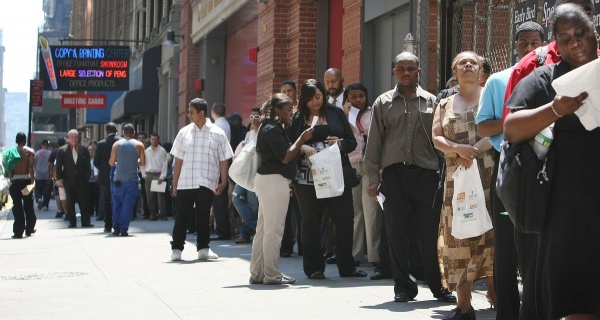 Date Posted: Monday, February 4th, 2019
The unemployment rate for Black people in America has been quietly creeping back up to its sky-high levels from last year just months after the president bragged they were at their lowest. Meanwhile, the number of payroll jobs increased by nearly double the rate it was projected to, according to employment numbers for January released by the Bureau of Labor Statistics (BLS) on Friday, which was also the start to Black History Month.
Those two figures that were trending in opposite directions resulted in the overall unemployment rate to also rise to 4 percent in part because of the “impact of the partial federal government shutdown,” BLS wrote in its report.

While the shutdown ended last week after more than a month, its effects were expected to linger, especially among African-Americans, who make up more than 18 percent of government employees, according to the Guardian. For a full perspective, Black people only make up 12 percent of the American population.
Welcome to another look at the #JobsReport and its effects on Black workers. Given that we are coming off a partial gov't shutdown – this disproportionately affected AfAm workers as they are over-represented in the govt industry pic.twitter.com/OArN2MRMmD
— Harin Contractor (@HarinContractor) February 1, 2019
The combination of all of the above resulted in a 6.8 percent Black unemployment rate for January, the highest since it was 7.7 percent in January 2018. It was just 6 percent in November, underscoring what could become a worsening trend for African-Americans looking for work.
However, if there was a silver lining, it was the lingering reminder of former President Barack Obama’s amazing handiwork in reviving the American economy following the great recession of 2008. Because of it and in spite of President Donald Trump’s best efforts to undermine that work, there were more than 300,000 jobs added to payrolls last month.
Congratulations to @POTUS44 @BarackObama for giving us 100 consecutive months of job growth for the first time in American history.#Obama didn't just make America great again, he made it greater! @USDOL @BLS_gov #JobsReport #ThanksObama
— Cy_Guy (@Cy_Guy) February 1, 2019
A fact check found that “the black unemployment rate has been in a years-long downward trend that continued under Trump” … albeit at a slower pace than in recent years.” Now, it looks as if that trend has now reversed itself as it pertains to Black people out of a job.
Still, if there is another shutdown in two weeks, as the president has threatened to help make happen, February’s unemployment rates for the U.S. as a whole and Black workers, in particular, are almost assured to keep on rising. That would be a bad sign for a president who campaigned in part on job creation and has already begun his re-election efforts.
Meanwhile, the unemployment rate for white men and white women stood at 3.5 percent and 3.2 percent, respectively. The unemployment rate for Asians fell to 3.1 percent.