Trump's 'Executive' Time Is A Waste Of Time 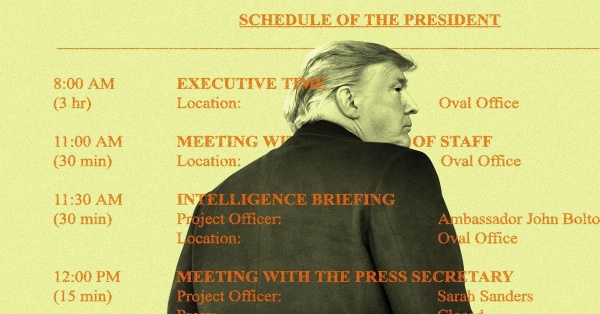 Someone in the White House leaked Trump’s private schedule for the last three months, and it shows Trump spending the majority of his time watching TV, tweeting, and consuming media.

– Since Nov. 7, the day after the midterm elections, Trump has spent around 297 hours in Executive Time, according to the 51 private schedules we’ve obtained.

– For those same schedules, Trump has had about 77 hours scheduled for meetings that include policy planning, legislative strategy and video recordings.

Some days, Executive Time totally predominates. For instance, he had 1 hour of scheduled meetings on Jan. 18 (with acting chief of staff Mick Mulvaney and Treasury Secretary Steve Mnuchin) and 7 hours of Executive Time.

– The day after the midterms, Trump’s schedule had 30 minutes for a chief of staff meeting and more than 7 hours for Executive Time.

This is the second leak of Trump’s private schedule that has been released to the media. A little more than a year ago, Trump’s private schedule leaked and it showed him not starting his day until 11 AM and only working until 6 PM. It might seem unimaginable, but Trump is doing even less now. The president now has entire days that are spent tweeting and watching television.

Trump isn’t governing, so who is running the country?

Donald Trump isn’t governing. He isn’t interested in running the country, which raises the question is anyone running the country? Trump’s administration runs around with no direction because there is zero leadership at the top. Trump would rather tweet, watch TV, and golf than do the job that the presidency requires. The Trump administration is in year three, and they have accomplished nothing.

The most precious and limited resource that a president has is time.

Trump isn’t maximizing his time in the White House, which is why his administration has been a total failure.

Donald Trump can have all the “executive time” that he wants after voters boot him from the White House and send him back to Trump Tower.