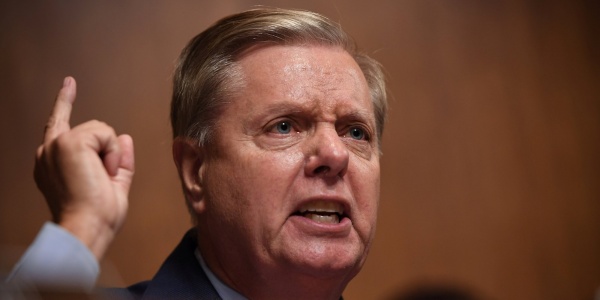 Date Posted: Wednesday, January 30th, 2019
On Monday, Senator Lindsey Graham, the South Carolina Republican, reiterated a position that cuts against the core of the Constitution. President Donald Trump “must” invoke emergency powers to construct a border wall, he wrote, “if the White House and Congress fail to reach a deal.” The comment allies Graham with some immigration hard-liners in the Republican Party and is perhaps intended to avert another pointless government shutdown. But it marks a betrayal of Congress.
A border wall would be a major budget item, a transformative piece of infrastructure, and an impingement on the property rights of thousands of American citizens. “Less than one-third of the needed land is currently owned by the federal government,” explains Ilya Somin, a law professor at George Mason University. “The rest—as much as 1,300 miles—is held by private owners, Native American tribes, and state governments, many of whom are unlikely to sell voluntarily. Even if the wall does not cover the full 2,000 miles because it excludes some areas, such as those that have ‘natural’ barriers, many property owners will have to be displaced.”
Even when Republicans held both houses of Congress, they failed to approve funding for the wall that the Trump administration wants to build. What’s more, “nearly two-thirds of Americans surveyed in a new poll said they are against President Trump declaring a national emergency to direct the construction of a wall along the southern border,” The Hill reports, “almost twice the amount of those in favor of it.” The prospect of a president embarking on a major initiative unilaterally, against the popular will, and seizing thousands of parcels of private property in the process is why we have a Congress to check him.
The Framers assumed that those elected to the co-equal branch would jealously guard their power, at times even to excess. Instead, Graham has become so focused on currying favor with the president that he is betraying one of his core constitutional responsibilities in order to play sycophant.
In doing so, he is exacerbating an imperial presidency that grew under Bill Clinton, George W. Bush, and Barack Obama. “Each abuse builds on the next,” writes David French, who concludes, “The loser is our constitutional republic.”
It is bad enough when presidents, their staffers, and their apologists undermine the separation of powers in favor of the executive branch. It is even worse when a legislator joins in undermining his own branch. There is only one position for a responsible U.S. senator: If the White House fails to reach a deal with Congress on a border wall, it simply doesn’t happen.