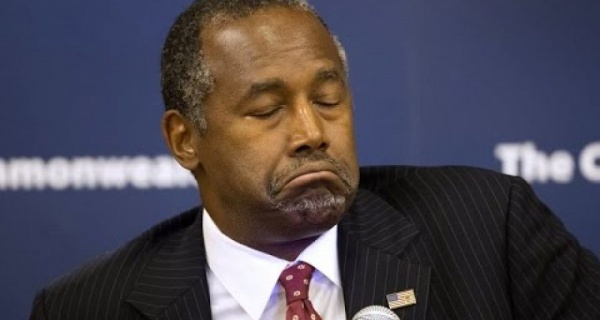 Date Posted: Monday, January 28th, 2019
Ben Carson loves his boss in the big house and he will defend him at any cost — even if it means veterans, low-income communities and government workers are suffering. The incompetent secretary of the Department of Housing and Urban Development (HUD) is standing by Trump’s government shutdown and racist border wall.
In a soulless statement Thursday, Carson said, “We can continue to hope that our leaders will recognize that this is an easy problem to solve. I mean, just take your ego out of it.” The only person who needs to take his ego out of it is our hateful president.
When asked for clarification, Carson’s spokesperson told NPR the message was for Senate Majority Leader Mitch McConnell and House Speaker Nancy Pelosi: “They need to send the President an acceptable bill so that important government functions can continue.”
Carson’s reaction is no shocker. He ruins anything he touches. HUD has declined dangerously under his deplorable leadership. The Detroit native has apparently managed to makes lives even worse for people in need. In November, a report from NBC News revealed that under Carson and Trump, “deteriorating living conditions” in public housing has surged. Federally subsidized multifamily properties failed inspection 30 percent more than in 2016. The Trump administration was explaining this shocking increase by falsely saying its rules to pass inspections are much stricter than Obama’s were.
Yep, the blame always goes to Obama instead of pointing to the secretary of HUD, who has no relevant experience and appears to be clueless on how to do his job.
“HUD has lost hundreds of staff members in the wake of a hiring freeze mandated by President Donald Trump. HUD’s enforcement office, tasked with going after the worst landlords, now has the lowest staff levels since 1999, according to a federal watchdog,” NBC News reported. “At the same time, Carson has proposed raising rents on poor families, requiring them to pay a higher percentage of their income for housing, and the Trump administration has pushed — so far unsuccessfully — for steep budget cuts.”
HUD has reportedly fired 480 regional staff members from the Obama era.