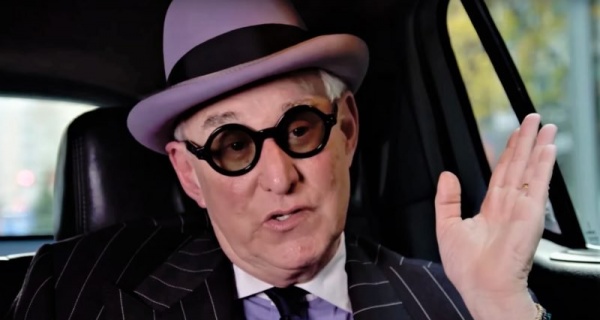 Roger Stone, at the close of 2018, viewed by many as the likely next target to be arrested and indicted in Special Counsel Robert Mueller’s Russia investigation — and sure enough, the veteran Republican Party operative was arrested by FBI agents early Friday morning on seven charges of federal crimes.

But long before he became known for some of the shadiest machinations in the ongoing Trump-Russia scandal, the 66-year-old Stone, who returned to the GOP in 2015 after being registered as a Libertarian for three years, had a dark history in right-wing politics dating back to the Nixon era.

Stone is a self-described “dirty trickster,” and he takes great pride in it. Here are five of Stone’s sleaziest pre-Trump campaign activities.

1) Stone was fired by Sen. Bob Dole in the ‘70s for being a Nixonian ‘dirty trickster’

Stone, born in 1952, was in his late teens when he became an aide for President Richard Nixon’s 1972 reelection campaign. Although Stone has insisted that he never did anything illegal during the Watergate scandal, he has described his work during that period as “trafficking in the black arts.” After Nixon stepped down as president in August 1974 because of Watergate, Stone went to work for Sen. Bob Dole. However, he wasn’t in Dole’s employ very long; the Kansas senator fired him after he was identified by syndicated columnist Jack Anderson as being a “dirty trickster” for Nixon. One of Stone’s tricks was hiring a Republican operative to infiltrate the 1972 presidential campaign of Democrat George McGovern, who suffered a landslide defeat when Nixon was reelected.

2) Stone is a self-described ‘Nixonite’

During Watergate, many prominent Republicans — including Sen. Barry Goldwater — distanced themselves from President Nixon. But Stone is one GOP operative who is openly proud of his work with Nixon and has bragged about being a “Nixonite.” In 2008, the New Yorker quoted Stone as saying, “The reason I’m a Nixonite is because of his indestructibility and resilience. He never quit. His whole career was all built around his personal resentment of elitism. It was the poor-me syndrome.”

Stone and Paul Manafort — Trump’s former 2016 campaign chairman and another major target of Mueller’s Russia investigation — go way back: when a 24-year-old Stone became president of the Young Republicans in 1977, Manafort was the one managing his campaign. And they went on to work together on Ronald Reagan’s 1980 presidential campaign. In 1980, Stone and Manafort, along with their associate Charlie Black, formed the right-wing Washington, DC lobbying group Black, Manafort & Stone, which not only represented Republicans in the U.S. but also corrupt dictators ranging from Ferdinand Marcos in the Philippines to Mobuto Sese Seko in the Congo. As bad as the Russian and Ukrainian oligarchs Manafort worked with in the 2000s and 2010s were, some of the dictators, tyrants, and thugs that Stone and Manafort represented in the 1980s were even worse.

4) Stone was a lobbyist for Angola’s brutal Jonah Savimbi

In addition to working with dictators like Marcos and Seko, the firm Black, Manafort & Stone represented Jonah Savimbi — whose National Union for the Total Independence of Angola (UNITA in Portuguese) tried to overthrow Angola’s Marxist government in the 1980s. According to Human Rights Watch, UNITA was ruthless and “used terror as a policy to obtain supplies and coerce and intimidate civilians. Indiscriminate killings, mutilation of limbs or ears and beatings were used by rebels to punish suspected government sympathizers or as a warning against betraying UNITA.”

In his 2004 Democratic presidential primary campaign, the Rev. Al Sharpton had an unlikely advisor: Roger Stone, who helped the civil rights activist craft a message against Howard Dean (another Democrat who ran in that primary). When Sharpton stressed that Dean, as governor of Vermont, hadn’t had any blacks or Latinos in his cabinet, that messaging came from Stone — who, in a 2004 interview with the New York Times, said of Sharpton, “There has not been a candidate with this much charisma since Ronald Reagan.”

But Stone had an ulterior motive: he wanted to divide Democrats. Sharpton eventually dropped out of the race and endorsed Massachusetts Sen. John Kerry, who won the 2004 Democratic presidential nomination but lost to incumbent Republican President George W. Bush in the general election.