According To The ADL, Three Of Four 'Extremist Killers' Were White Supremacists 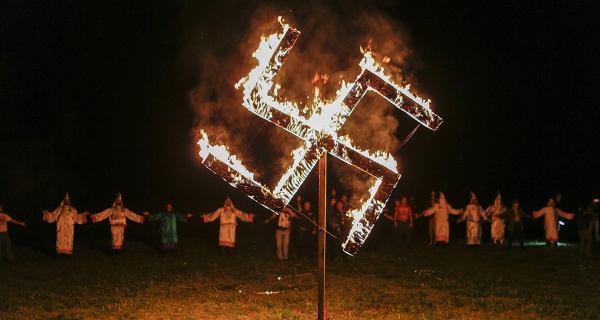 Date Posted: Thursday, January 24th, 2019
The Anti-Defamation League released its annual report, “Murder and Extremism in the United States 2018,” on Wednesday, which tracked murders perpetrated by all types of domestic extremists over the past year. According to their research, right-wing extremists killed more Americans in 2018 than they have in any year since 1995. The 50 extremist-related murders also made last year the fourth-deadliest year since 1970.
The murders were overwhelmingly linked to white Americans. Only three deaths (or 6 percent of the extremist-related murders in 2018) were perpetrated by a black person. And despite what the anti-immigrant Trump administration would have you believe, none of the people charged with an extremist-related death snuck into the country with a Mexican caravan. In fact, in 2018, a grand total of zero killer radicals were born outside of the United States.
Some other notable findings in the ADL report, paraphrased:
While you might be afraid of Antifa and Black Identity Extremists, only 3.2 percent of the killings between 2009 and 2018 (the past 10 years) were committed by left-wing extremists, including black nationalists.
“It’s time for our nation’s leaders to appropriately recognize the severity of the threat and to devote the necessary resources to address the scourge of right-wing extremism,” said Jonathan Greenblatt, CEO of the ADL.
The organization urges that policies are needed to combat extremism, including political leaders and law enforcement authorities speaking out against it. The group notes that civics and anti-bias education can help fight this pervasive trend, as well as better responses to hate crimes.
The report does not list all hate crimes and mass shootings—only ones with “positive evidence connecting the murderer to an extremist group or movement.” For instance, the October shooting deaths at a Louisville, Kentucky, Kroger were not listed because there is no evidence tying the killer, Gregory Bush, to an extremist group or movement. Even though Bush reportedly told a witness that “whites don’t kill whites,” he was probably just run-of-the-mill crazy.
This nations spends billions to try to stop ‘radical Islamist terrorists’, raise all sorts of red flags when anyone of the Muslim faith is anywhere close to an American, and will devote days of airtime if any ‘radical muslim terrorist’ actually does something, when it is very rare to find said radical (you’re more likely to find ‘radicals’ who’ve been turned radical by the FBI).
Meanwhile, we have an education secretary who supports spending public money sending kids to places like Covington Catholic School, discuss how the ‘lone wolfs’ are responsible for an act of violence, and have interactions trying to determine how the victims somehow instigated the incident (you know, by being black and nearby).
The media plays a big role in that.
Terrorist attacks committed by Muslim extremists receive 357% more US press coverage than those committed by non-Muslims, according to new research from the University of Alabama. The researchers controlled for factors like target type, number of fatalities, and whether or not the perpetrators were arrested before reaching their final statistic.