Will The House Impeach Brett Kavanaugh? 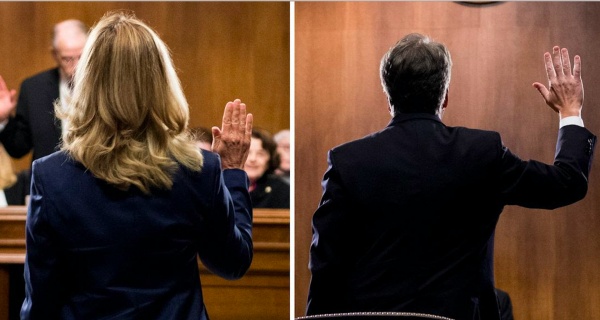 Date Posted: Wednesday, January 23rd, 2019
The battle over Brett Kavanaugh's Supreme Court confirmation might not be over, even though he was elevated to the high court last fall.
Rep. Joe Neguse, a 34-year-old freshman Democrat from Colorado, says he expects the House Judiciary Committee to consider a perjury investigation of Kavanaugh, reports the conservative journal National Review.
"There's no question he committed perjury during the confirmation hearings and so forth," Neguse told a constituent last Friday in a response to a question about whether Justice Kavanaugh should be impeached. "I think the Judiciary Committee is likely to take that up."
Watch video of Neguse's comments below:
Kavanaugh has kept a low profile since joining the Supreme Court, but the brouhaha over his confirmation-hearing testimony has not gone away. To many progressive activists he is a symbol of toxic white privilege -- some have drawn comparisons between him and the Covington Catholic high-school boy whose faceoff with a Native American elder has become the country's latest ideological/racial flashpoint.
Covington is the same type of school for privileged White boys that Kavanaugh attended.
— Diana Manister (@DianaCialino) January 22, 2019
In October, Supreme Court Chief Justice John Roberts charged the Judicial Council of the Tenth Circuit with reviewing various misconduct allegations against Kavanaugh. The allegations, the order stated, included that Kavanaugh "made false statements during his nomination proceedings to the D.C. Circuit in 2004 and 2006 and to the Supreme Court in 2018; made inappropriate partisan statements that demonstrate bias and a lack of judicial temperament; and treated members of the Senate Judiciary Committee with disrespect."
These allegations range from Kavanaugh's contention that he "did not drink beer to the point of blacking out" while in prep school and college to his claim that, while serving in the George W. Bush administration in the early 2000s, he didn't realize he'd been given confidential information stolen from Judiciary Committee Democrats.
During the confirmation process last fall, Kavanaugh faced multiple allegations of sexual assault, all of which he vigorously denied.
In December, the Tenth Circuit determined it didn't have the authority to pass judgement on a Supreme Court justice.
Most congressional observers believe it is highly unlikely that Justice Kavanaugh will be impeached by the House of Representatives.