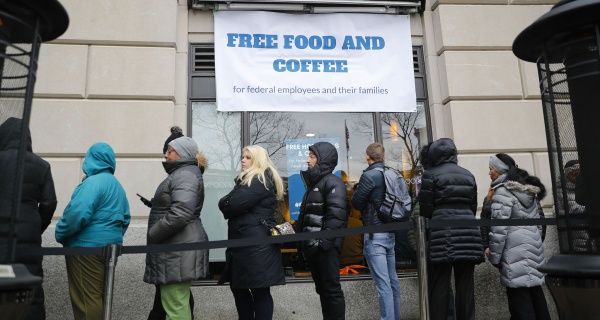 More than three weeks into what has become the longest federal government shutdown in US history, nearly 800,000 employees have missed their first paycheck, the New York Times op-ed page is urging TSA officers to strike, and Donald Trump has served fast-food burgers to the Clemson football team. There are seemingly so many disparate and surreal elements to the whole saga—for instance, the president reportedly cursing out his own chief of staff in front of congressional leaders—that the human-level consequences of the shutdown can be glossed over. Some food inspections have slowed or stopped. Border Patrol agents are among those not being compensated. There's now a union lawsuit trying to prevent IRS employees from having to process tax returns while they aren't being paid, even as the IRS tells 46,000 of its employees to start work again, sans paycheck.

Many of the workers who have been put in a lousy position by this shutdown are far removed from the political back and forth in DC. An IRS customer service representative I'll call Ray to protect his privacy—and who is an acquaintance of mine—is one of those workers. On Tuesday, I talked to him about his situation.

VICE: How screwed are you?

Ray: In my mind, I'm not that fucked. Or, I guess the answer to that is a little more technical. I wasn't expecting this to happen—actually, no one was expecting this to happen. Where I work, we were told before the shutdown happened that everything would be fine, and even it did, it never lasts that long. The president makes empty threats. It was a surprise—and it came over Christmas and New Year's, so honestly, at that point, it was almost weirdly convenient. Now I just read, of course, that it's the longest shutdown ever, longer than the one in '95. I read, too, about how we're going to get paid for the time off, but it all seems uncertain, and we don't know yet, obviously, when we're going back.

So I just applied for unemployment yesterday, and I have to call in—I'm not totally fucked, at the moment, but I'm running out of money. I'm probably going to have to tell my landlord that I can't pay rent. My girlfriend and I are spending less money everywhere. I'm just waiting, hoping that it will end. Everything will slowly just get worse. Like unemployment, and then I have to wait for that to get medicine and pay bills, and so on. It's getting there. Today I'm not fucked. But come back to me next week.

And there's no end in sight, yeah?

I don't know what's real, honestly, or what's not real. I don't believe anything working in the government until the person who has to talk to me talks to me. Like the lady who hired me, I mean. It's all made up. People I work with, we haven't talked to one another. Like, occasionally I'll get some texts from them, did you see this, or did you see that, but, in the end, who cares, because we know all the shit they're saying on TV doesn't mean anything. I wish I could say I've texted one person to see how they're doing, but I haven't. And no one's asked me. I have the feeling, though, if it keeps getting worse, that'll happen.

So you're saying the broader implications don't affect you at all? Or that you don't care any longer, and you just want the doors to the office to open up again?

The last one, exactly. It's all posturing. You'll see Trump—I think it was last week that he was talking about the IRS being open, so people would be able to get their tax returns on time. But they're teasing. It seems to me like they're trying to get the government open without having to pay anybody [for their labor]. Which, obviously, doesn't seem as if it's going to work. And, as I said, I don't believe anything until the phone rings, and the person who has to talk to me talks to me.

Are you following the politics of the shutdown?

I just want to go to work. I don't care about the politics. Everyone's just saying bullshit.

Do you understand broadly why the government is shut down?

My impression is... Look, I didn't vote for Trump, but if you want a president who's entertaining to watch, he's probably hard to beat. Look at the fucking fast food he served the Clemson football team the other day. The White House was filled with McDonald's. It's almost like King Ralph, that movie with John Goodman. It's like if Louie De Palma from Taxi was president. He had a Republican-controlled Congress, and he couldn't get anything done, and then with the midterms, he lost the majority in the House. And now he has to shut the government down because he has to deliver on this wall that he's promised. It seems, to me, like an old-fashioned pissing match. I think it's a tactic of a businessman. The main thing is, it makes me want a new job.

What have you been doing?

It's sad. I got to tell you: It's not something I'm particularly proud of. I'm slowly driving my girlfriend absolutely insane, I think. It sort of feels like The Burbs, where Tom Hanks is just sitting around the house, like, I'll just sit around the house and relax and enjoy everything, but in reality, he's actually making everybody around him go crazy. [Laughs] It's getting to the point where Carrie Fisher's about to leave with their son. I used to work 6 AM to 2:30 PM, and, you know, I was fairly responsible. Now, it's all slowly morphed to where I sleep very late. And then it's basically just waking up from there. Maybe eat a light breakfast. I'm trying to say in shape, but we'll see. Eventually, I should be paid for this, but I'm not trying to blow all my money at the moment, too. And then I'm watching TV, or spending time on my phone. I wish I had something interesting I did, but I don't. It's really very boring.

Do you have a date in your head where you really start freaking out?

February 1. Honestly, because I've never really been late on my rent. I guess, though, as long I have unemployment, I'll be generally OK.

You're waiting around, that's the idea? And crossing your fingers it wraps up soon?

Yes, exactly. You can't plan. No money's coming in. It truly is completely miserable. It might seem to other people like it's fun, but it's not.

It was characterized as a vacation by Kevin Hassett, Trump's economic adviser.

Man, it's not a vacation. Unless a vacation is sitting around forever, feeling weird.

You have no purpose, and nowhere to be.

All of a sudden you're told to sit still until you don't know when.