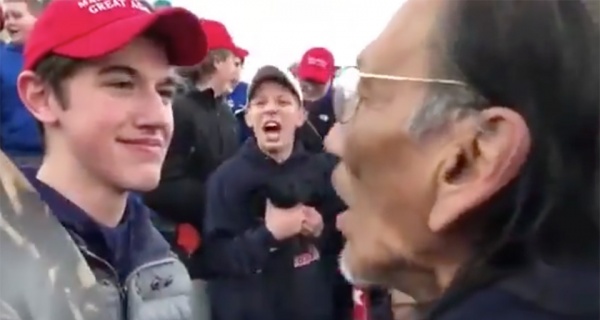 Donald Trump started off the week by mocking one of the worst Native American massacres in US history in order to score some political points. By Friday, a group of young white teenagers were following his footsteps by taunting Native American elders at the Indigenous Peoples March in Washington, DC — on the steps of the Lincoln Memorial, no less.

In videos shared widely on YouTube and Twitter, a young man wearing a self-assured smirk and a red “Make America Great Again” stands inches away from a native elder who is beating a drum. Different angles of the incident show a group of a few dozen young people, mostly boys, in the background, jumping up and down and jeering in unison at the group of elders present for the day’s march. In some shots, the teens appear to be shouting “build that wall, build that wall.”

According to Vincent Schilling from Indian Country Today, the elder targeted in the video clip is Nathan Phillips, a Vietnam veteran and former director of the Native Youth Alliance. Phillips is a keeper of a sacred pipe, Schilling reports, and each year hosts a ceremony honoring Native American veterans at Arlington National Cemetery. The commemoration coincided Friday with the first annual Indigenous Peoples March, which was organized by a coalition of tribal councils, activists and youth leaders to raise awareness on issues facing their community, from police brutality to mental wellness to violence against women.

More video shows Phillips wiping away tears in reaction to the harassment.

“This is Indigenous land you know, we’re not supposed to have walls here. We never did for millenniums — before anybody else came here we never had walls,” he says in the clip. “I wish I could see that energy in that young mass of young men down there. To put that energy into making this country really, really great — helping those that are hungry.”

The teenagers in the clip have yet to be identified, though young men in the background appear to be wearing clothing with the insignia for Covington Catholic High School in Park Hills, Kentucky. School officials have yet to respond to the allegations.

Rep. Deb Haaland, one of the first two Native American women elected to Congress, tweeted on Saturday calling the incident “heartbreaking” and a display of “blatant hate and disrespect.”