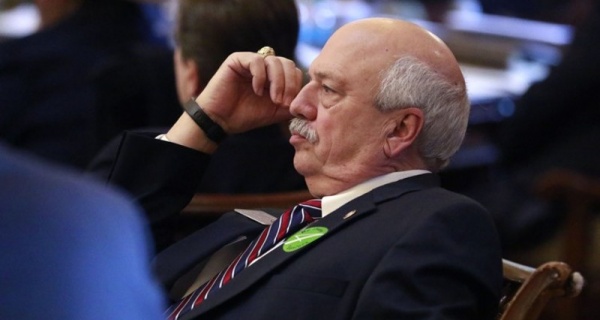 House Speaker David Ralston Friday named as one of his committee chairs a state representative who opposed the erection of a statue to the Rev. Martin Luther King Jr. on the grounds of the State Capitol and said the Ku Klux Klan made “people straighten up.”

“The speaker’s philosophy is that people deserve a second chance and that’s what he has given Chairman Benton,” said House spokesman Kaleb McMichen. Benton did not respond to requests for comment.

The announcement of Benton as chairman of the House Retirement Committee comes as the state prepares to observe the 90th anniversary of King’s birth on Monday.

Ralston, R-Blue Ridge, stripped Benton of his chairmanship of the Human Relations and Aging Committee in June 2017 after Benton distributed an article to his House colleagues titled “The Absurdity of Slavery as the Cause of the War Between the States.” Ralston also removed Benton from a civics education study committee, despite having just named him to it.

The article was just one in a string of provocative comments or legislative proposals from the retired high school history teacher from Jackson County, 60 miles northeast of Atlanta. In 2016, Benton drew national condemnation for claiming the Klan “was not so much a racist thing, but a vigilante thing to keep law and order.”

“It made a lot of people straighten up,” he told The Atlanta Journal-Constitution. “I’m not saying what they did was right. It’s just the way things were.”

Charles Steele, president of the Southern Christian Leadership Conference, was distressed to hear Ralston had returned Benton to a leadership position.

“It’s a shame that we reward that type of mentality in today’s society, especially at the state level,” he said. “We have a problem with that and we are going to deal with it.”

The SCLC is part of a coalition of civil rights groups pushing to change state law that prohibits removing or altering Confederate monuments. Benton has been a fierce defender of those monuments. In March 2017, he called a press conference to push for passage of a resolution requiring the state to recognize Confederate Memorial Day as an official holiday.

The resolution referred to the Southern states’ role in the Civil War as a “four-year struggle for states’ rights, individual freedom, and local governmental control” — but made no mention of slavery.

In 2016, he introduced legislation calling for a constitutional amendment protecting Stone Mountain as a Confederate memorial and another bill would require street names to revert to their names prior 1968, the year of King’s assassination. The bill didn’t mention King by name but the effect would have been to rename a portion of Martin Luther King Jr. Boulevard in Atlanta as Gordon Road, in honor of Confederate Gen. John B. Gordon, an early leader of the Georgia Klan.

When asked if Benton had repudiated his earlier positions, McMichen declined to comment. However, the fact that the appointment would be controversial did not come as a surprise.

“I was shocked it took you as long to call as it did,” McMichen told an AJC reporter Friday.

Because he was stripped of his committee chairmanship when the General Assembly was not in session, Benton sat out of House leadership for just one legislative year. His new role as chair of the retirement committee arguably is a promotion, since that committee oversees large financial funds and has more legislation assigned to it.

Ralston has never publicly criticized Benton by name, and apart from the temporary demotion from House leadership, the controversies have had little impact on the seven-term legislator from Jackson County. Benton handily defeated his opponent in the Republican primary last year and was unopposed in the general election.

The announcement comes as Atlanta prepares to observe what would have been King’s 90th birthday. McMichen said the timing of Benton’s appointment was unrelated to the annual holiday.

“The (state) constitution dictates when we have to come into session. Dr. King was born on a certain date and the two happen to come within a week of each other on the calendar and we always announce committee assignments at the end of the first week of session,” McMichen said. “That’s where we are.”