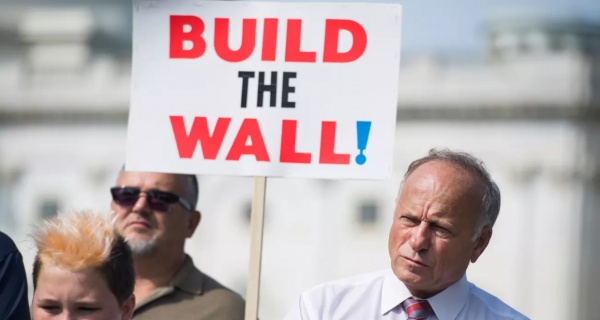 Date Posted: Tuesday, January 15th, 2019
Congressional Republican leaders agreed to strip Rep. Steve King of his positions on House committees Monday after he lamented in an interview with The New York Times that the term "white supremacist" had become offensive.
The Iowa Republican tried to clarify that he rejects white supremacy, but with his long history of creating uproar across the nation with his racially-charged comments, those objections largely fell on deaf ears.
While defending his remarks in the past, the Iowa Republican has claimed he is regularly misquoted and that he doesn't trust most media outlets.
Before his recent re-election, King was under fire for reports that he met with members of the Freedom Party, a political organization founded by a former Nazi SS officer, during a trip to Europe funded in part by a Holocaust memorial nonprofit
#1 King suggests an electric fence along U.S.-Mexico border
On the U.S. House floor in July 2006, King suggested building a border wall along the country's southern border and said the top of the fence could be electrified, not to kill a person, but instead discourage them from "fooling around with it."
"We do that with livestock all the time," King said.
# 2 If Obama is elected president, King said terrorists would 'celebrate'
In March 2008, King said terrorists would celebrate a Barack Obama presidency and that al-Qaeda "would be dancing in the streets in greater numbers than they did on September 11 because they would declare victory in this war on terror."
King also said terrorists would be gleeful about Obama's pledge to pull U.S. troops from Iraq and that Obama's father had Muslim roots in Kenya and gave his son the middle name Hussein.
#3 King compares immigrant children to drug mules
While talking about "Dreamers" in a July 2013 interview for Newsmax TV, King claimed that for every young immigrant who becomes a school valedictorian there are "100 out there that, they weigh 130 pounds and they've got calves the size of cantaloupes because they're hauling 75 pounds of marijuana across the desert."
#4 King compares immigrants to hunting dogs
While discussing immigration at a May 2012 town hall in Pocahontas, King said the U.S. should select the best immigrants, a process he likened to choosing hunting dogs.
"You want a good bird dog? You want one that’s going to be aggressive," King said. "Pick the one that’s the friskiest … not the one that’s over there sleeping in the corner."
#5 King questions what minorities have contributed to civilization
King created an uproar on social media after he questioned the contributions of non-white people during a cable television appearance in July 2016
In response to a comment about the lack of diversity seen at the Republican National Convention, King questioned who has made more contributions to civilization than white people.
"I'd ask you to go back through history and figure out, where are these contributions that have been made by these other categories of people that you're talking about, where did any other subgroup of people contribute more to civilization?" he said.
#6 Confederate flag displayed on King's desk
King came under fire for displaying a Confederate flag on his office desk during an interview with Sioux City television station KCAU in July 2016.
Following the death of two Des Moines-area police officers, King said he removed the flag after learning that Scott Michael Greene, the perpetrator, had displayed it at a Urbandale High School football game, according to the Sioux City Journal.
#7 'We can't restore our civilization with somebody else's babies'
In a tweet posted in March 2017, King was criticized across the political spectrum for a tweet supporting Geert Wilders, a far-right candidate for prime minister in the Netherlands widely interpreted as racist.
King further explained to CNN that "You've got to keep your birth rate up, and that you need to teach your children your values. In doing so, you can grow your population, you can strengthen your culture, and you can strengthen your way of life."
#8 Uncontrolled immigration could lead to ethnic strife, King says
In a tweet posted September 2016, King warned that "cultural suicide by demographic transformation must end." He later defended his comment during a candidate forum and said uncontrolled immigration in the U.S. could lead to ethnic strife similar to that experienced in Europe.
#9 King compares transgender troops to castrated slaves
In a speech on the House floor in July 2017, King compared the use of taxpayer money on hormone therapies and gender reassignment surgery for U.S. service members to the castration of Ottoman Empire slaves.
#10 Parkland shooting survivor is criticized
In a meme posted on King's campaign Facebook page, the congressman ridiculed Emma Gonzalez, an outspoken survivor of the Parkland school shooting and gun control advocate. Posted in March, the meme referenced Gonzalez's Cuban heritage and said "your ancestors fled the island when the dictatorship turned Cuba into a prison camp, after removing all weapons from its citizens; hence their right to self-defense."
U.S. Rep. Steve King says his campaign was using humor to make a political point when it posted a meme on its Facebook page suggesting Parkland mass shooting survivor Emma Gonzalez was betraying her Cuban heritage by advocating for gun control.