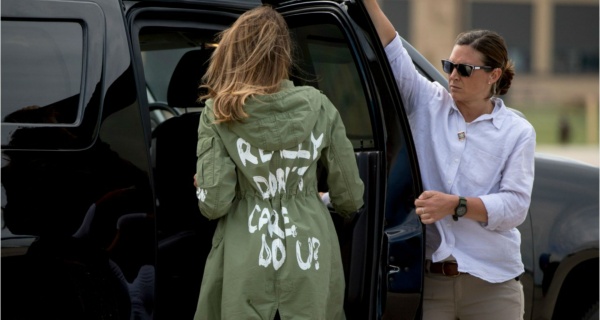 A new profile on Melania Trump highlights her life as D-list model before meeting her now husband, Donald Trump. One of the keys parts of the story is that she met Trump just when she was about to run out of money in the United States. How ironic.

Sunday Express, a U.K. outlet reports, “In 1996 Melania and her sister officially left their home in Slovenia to pursue their dreams in the fashion industry in New York. The brunette beauty was an impressive model and was said to be continually enthusiastic about her work.” However, despite working for famous photographers, she never really blew up in her career. A friend said when Melania met Donald in 1998, “She ran into Donald just at the right time. She was just about out of money, at the end of her rope and about to move back to Eastern Europe.”

Sounds like Melania lucked out. Three years later, in March 2001, Melania was granted a green card in the elite EB-1 program, “which was designed for renowned academic researchers, multinational business executives or those in other fields, such as Olympic athletes and Oscar-winning actors, who demonstrated ‘sustained national and international acclaim,'” according to The Washington Post. What did Melania do? Model. She modeled for Camel cigarettes and once hugged a six-foot inflatable whale in a string bikini for Sports Illustrated. Quite extraordinary, right? The nickname for EB-1 program is the Einstein visa. You totally think Einstein when you think of Melania.

Melania Trump even brought her parents over from Slovenia, her extraordinary homeland, possibly through “family migration,” which is a program Trump is trying to stop. The award of the EB-1 visa does not address if she worked without authorization or misrepresented herself to enter the U.S. or if she sponsored her parent via family immigration or ‘chain immigration’ — as President Trump calls it.”

The Washington Post has questioned Melania’s ability to even qualify for the Einstein, “How did she convince immigration authorities that she qualified for the EB-1 program? Morrison, the former congressman, and immigration expert said that Melania Trump’s resume in 2001 seems ‘inconsistent’ with the requirements of the visa.” Unfortunately, no one can answer this question, but maybe it has something to do with being in a relationship with a rich and powerful man. The Washington Post reported, “In 1998, at age 28, she began dating Trump after meeting him at a party, an association that raised her modeling profile. She started appearing on Page Six of the New York Post and in other celebrity columns on the arm of the real estate developer.”

In 1998 she is dating Trump, who loves women from other countries, and in 2001 she was granted a green card in the elite EB-1 program.