Congressman Lends His Support To The Phrase 'White Supremacist' 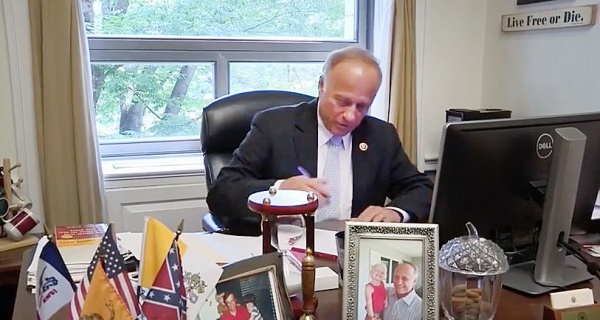 “White nationalist, white supremacist, Western civilization — how did that language become offensive?” Rep. Steve King (R-IA) said in an interview with the New York Times’s Trip Gabriel published Thursday morning. “Why did I sit in classes teaching me about the merits of our history and our civilization?”

King’s comments are about as clear a commitment to white racial politics as you can get. They weren’t from a private meeting that was recorded or masked in coded language, but in an on-record interview with the country’s paper of record.

King, who is perhaps the most aggressive advocate for immigration restrictionism in Congress, has never really bothered to hide the racial animus underlying his politics. He has retweeted a neo-Nazi, warned of immigrants with “calves the size of cantaloupes” smuggling drugs across the border, endorsed a white supremacist running for mayor of Toronto, and written that “we can’t restore our civilization with somebody else’s babies.”

But openly musing about how being a “white supremacist” or “white nationalist” shouldn’t be offensive makes the subtext text.

King was first elected to Congress in 2002, a leading indicator of what the GOP was becoming. Some Republicans and their allies in the conservative press have tried to obfuscate this turn in their party, but King’s continued presence is a living testament to what the party really is. A tiny part of me appreciates his candor.

What these comments do is lay some of the stakes of our current political moment bare. The question in the United States and other countries facing a rise in anti-immigrant right-wing populism is this: Can our most basic norms against racism and bigotry, the ones behind King’s complaint that “white supremacist” has become a dirty phrase, survive? And what happens to our societies if they don’t?