A Look At Democrats Who May Run For President In 2020 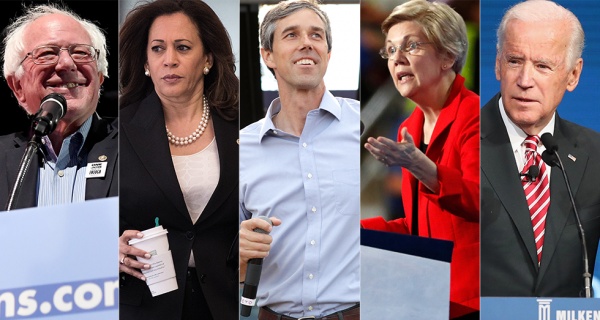 Here, The Hill presents its initial rankings of the Democratic field.

The old cliche holds that Republicans fall in line and Democrats fall in love when it comes to selecting presidential nominees. If that’s true, it is good news for O’Rourke, who excited Democrats nationwide even while failing in his bid to unseat Sen. Ted Cruz (R-Texas) in the fall.

O’Rourke came within 3 points of defeating Cruz in the strongly Republican state. More to the point, he proved to be a magnetic presence on the campaign trail and a fundraising juggernaut. He raised an astonishing $38 million in the third quarter of 2018 alone.

A number of aides to former President Obama have also talked up O’Rourke, drawing comparisons between his appeal and that of the former president.

Obama himself told his former aide David Axelrod that O’Rourke exhibited a similar sense of authenticity.

“The reason I was able to make a connection with a sizable portion of the country was because people had a sense that I said what I meant,” Obama told Axelrod, adding of O’Rourke, “it felt as if he based his statements and his positions on what he believed.”

There are still plenty of skeptics. Chicago Mayor Rahm Emanuel, himself a former Obama chief of staff, complained in a late November MSNBC interview, “He lost. You don’t usually promote a loser.” Commentators supportive of Sen. Bernie Sanders (I-Vt.) have also sought to knock the gloss off O’Rourke in recent weeks, questioning the Texan’s progressive credentials.

But those attacks show just how much of a threat O’Rourke poses to the rest of the field.

Sanders is a divisive figure in the Democratic Party — not least because he is not a member of it.

But the Vermont independent has won a hugely devoted following with the democratic socialist ideas that he had been pushing for decades before they became fashionable.

He also has the organizational advantages that come from his much stronger-than-expected 2016 showing against eventual nominee Hillary Clinton.

Ironically, Sanders’s best chance for 2020 success could be to ape what President Trump did in the 2016 GOP primaries. There were plenty of Republicans implacably opposed to Trump, but their votes were split among a large field. That allowed Trump to roll up victory after victory with a plurality of the vote.

There are dangers for Sanders: Warren’s all-but-inevitable candidacy could split the progressive vote while O’Rourke could draw the young voters who flocked to Sanders in 2016. Sanders would also be 79 by Inauguration Day 2021.

But, make no mistake, Sanders is a real contender if he runs.

Biden leads almost all opinion polls at this stage — and how you rate his chances depends largely on how much you think that matters.

A CNN poll earlier this month showed him with 30 percent support, more than double the level of the second-place Sanders, who grabbed 14 percent. A Suffolk University/USA Today poll suggested Democrats were more excited about a run by Biden than anyone else.

The case for Biden is straightforward: He can connect with the Rust Belt voters who carried Trump to victory in 2016, he was a loyal vice president to Obama and he is generally well-liked within the party.

But the case for Biden-skepticism is just as easily made. His strong polling numbers are a consequence of name recognition more than anything else, the doubters say — and an establishment Democrat first elected to the Senate in 1972 is hardly what the party wants in the current, insurgent-friendly political moment.

Biden first ran for president in 1988 and did so again in 2008. Could he climb the mountain in one final effort?

Harris, a first-term senator and former attorney general of California, is one of the most intriguing figures in the race.

She has made her national name in part through formidable, prosecutorial questioning of figures aligned with Trump, including then-Attorney General Jeff Sessions and Supreme Court nominee Brett Kavanaugh.

She is charismatic, a powerful orator and the strongest non-white candidate in the field — something that could be important given not just the importance of the black vote, but a more general acceptance among liberals that Democrats need to demonstrate their diversity.

Harris could also conceivably bridge the span of the party between progressives and centrists, drawing some support from both wings in a way that Sanders from the left, or Biden, toward the center, might struggle to do.

At the same time, parts of her record, including on criminal justice, give liberals a degree of heartburn. Still, she is clearly a top-tier candidate if, as is widely expected, she runs.

The video Warren released to mark the formation of her exploratory committee on Monday was slick and effective. It emphasized her role in pushing back against malfeasance on the part of financial institutions but also framed that as part of a bigger story, portraying her as a fighter for fairness. She also made specific reference to racial inequities.

Warren has been a progressive hero since her days pushing for the creation of the Consumer Financial Protection Bureau. She is a strong and fiery platform speaker. And it’s possible that she could outflank Sanders on the left.

But Democrats who are lukewarm about Warren question her political instincts, highlighting the curious recent episode where she claimed via DNA evidence that she had a Native American ancestor six to 10 generations ago. The intention was to defang Trump’s attack on her as “Pocahontas,” but the effort backfired, even drawing criticism from the Cherokee Nation.

More broadly, some Democrats worry that Trump’s visceral appeal to some white working-class voters will not be best countered by an erstwhile Harvard Law School professor from a deep-blue state.

Brown won his Senate reelection race comfortably in November, in a state Trump carried by 8 points against Clinton in 2016.

This is the core of his appeal to Democrats as a potential 2020 candidate: He is someone who understands the industrial Midwest in his marrow, and he can carve out a path to victory in that electorally vital region.

Brown may not have the glitz of some other contenders, but his rumpled authenticity could play to his advantage, his boosters say. A heartland progressive, he has long enjoyed strong support from labor unions.

Two questions loom large: whether Brown really wants to run, and whether he can quickly get enough traction if he does so.

On paper, Booker should be a formidable candidate: a young African-American senator with obvious oratorical gifts.

But Booker has been dogged by suggestions that he is more interested in publicity than action, dating all the way back to his days as mayor of Newark, N.J.

He has also sometimes been friendlier with the financial industry than today’s Democratic grass-roots voters might like. He famously criticized Obama’s 2012 campaign for attacking GOP nominee Mitt Romney’s work for Bain Capital, though he swiftly backtracked.

Booker’s perceived love of the spotlight can attract eye-rolls from colleagues — a more recent example being his “Spartacus moment” during the Kavanaugh hearings.

He will get his fair share of media attention if he runs, but he may need other contenders to stumble in order to vault into serious contention.

Klobuchar’s political abilities are often underrated — something she could prove one more time if she presses forward with a presidential run.

Klobuchar’s platform would, in essence, be based on an ability to connect with voters in the American heartland while committing no real sins of liberal heresy. Her legislative record involves work on issues that have appeal to Democrats and beyond them — lowering the costs of prescription drugs and protecting online privacy, for example.

Her public persona is affable and good-humored but one question is whether Democrats want a nominee to take the fight to Trump in a more aggressive way.

Bloomberg, the media billionaire who served three terms as New York City’s mayor, has given strong indications that he is considering a run for the White House.

“Do I think I could be a good president? Yes,” he told Chuck Todd on NBC’s “Meet The Press” in an interview that aired Sunday. He said he would make a decision by February.

Bloomberg’s path to the Democratic nomination is anything but clear, however. It would presumably involve winning over centrists and perhaps even disaffected Republicans with the promise of a candidacy that steers a middle ground and doesn’t pander to partisan or hard-left interests.

But that is likely to be a hard sell in a party where the energy is increasing with progressives.

Bloomberg, who twice ran for mayor as a Republican before changing his party affiliation, seems an uneasy fit for the Democratic spirit of the times.

Gillibrand has made women’s issues a key part of her appeal. As a senator representing New York, she is well-known in the nation’s largest media market and one of the epicenters of Democratic fundraising.

Gillibrand also got an opportunity to display her guts when Trump took aim at her with what was widely interpreted as a sexual innuendo a year ago. She doubled down on her call for him to resign afterward.

Still, as with Booker, there is a distrust of Gillibrand in some quarters, rooted in her perceived penchant for self-publicity. Her willingness to buck the party line, as when she suggested former President Clinton should have resigned over his affair with Monica Lewinsky, has created enemies as well as friends.

More generally, the answer to how Gillibrand overtakes several of the names higher on this list remains a difficult one to answer.