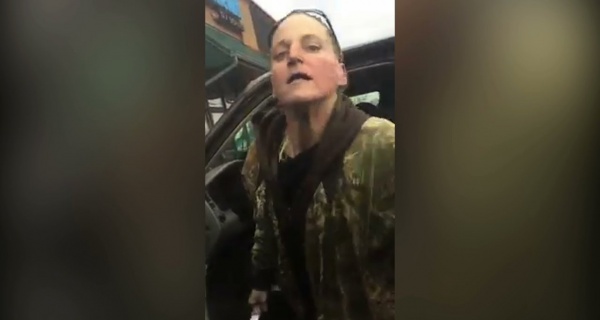 A knife-wielding white woman in McMinnville erupted into a racist diatribe and attacked a young black couple during a parking lot spat on Christmas Eve, according to the young mother who captured the scene on video.

Emora Roberson, 20, said she was driving with her boyfriend, her aunt and her 15-month-old daughter Monday when the family stopped at a strip mall on Oregon 99W about 2 p.m. to pick up a last-minute gift.

Their KIA Sedona pulled up next to a pickup truck parked in front of a Domino’s Pizza, Roberson said. Shortly after, the pickup’s driver began hurling racist slurs at the family.

Roberson said it was all because her aunt had “parked crooked.”

“My daughter was fast asleep, and this woman was basically trying to get into our car,” Roberson told The Oregonian/OregonLive in a phone interview Friday morning. She added that the woman was parked in a handicapped spot.

“Her truck didn’t have a handicapped sticker,” Roberson said.

According to Roberson, the enraged woman slapped and spit on her boyfriend, Keysuan Goodyear. Goodyear grew angry and warned the woman about her behavior and language.

The woman responded by whipping out a knife.

That’s when Roberson said she began filming the incident on her phone.

The video shows the woman with the drawn blade in her hand. Roberson can be heard saying that it appears the woman is going to try and stab her boyfriend.

“No, it’s called self-defense,” the woman yells at Roberson before dropping another racial slur.

The women then slams an open car door on Roberson, hops back into her pickup and begins using her cell phone. The woman later screams another threat at the Roberson and her family before the video ends.

“We eventually drove off. We still had Christmas shopping to do,” Roberson said. “My daughter woke up and was crying her head off.”

Afterward, Roberson said she contacted the McMinnville police about the incident. Capt. Rhonda Jaasko told The Oregonian/Oregonlive on Friday that the case is under investigation.

The young mother said the racial slurs and threats of violence didn’t bother her as much as the fact the woman acted that way in front of her daughter.

“I don’t know who made her so mad that day," she said. "That wasn’t any way to talk to me or talk to someone in front of a child.”