Barack Obama Revisits Our Past To Encourage Hope For The Future 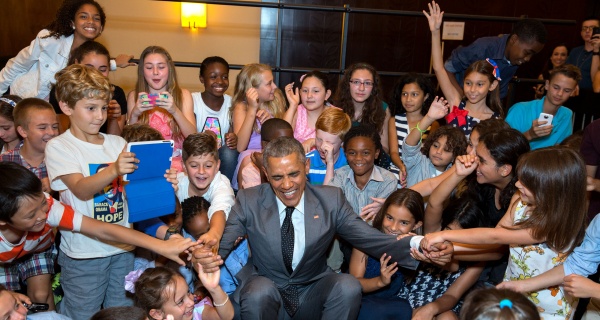 Mass shootings, #MeToo, family separation, climate change, impeachment. The world is dark and getting darker. Or at least that’s what it seems like from the relentless barrage of push alerts and Facebook posts blowing up our phones. In turn, we get angry, we despair, we withdraw. It’s a vicious cycle, with seemingly no reprieve.“We in the media—because of our own need for eyeballs and clicks and profits—we’re not telling the healing stories,” says author Irshad Manji, who is among the people Newsweek spoke to about how to move beyond fear and begin to fix our ­nation’s problems. “We’re telling the stories of the conflicts. We need to hear both.”

Robert F. Kennedy knew a thing or two about hope. Half a century ago, it was hope in the future, hope in people, hope in our capacity to do better, to be better, that spurred him to challenge a sitting president of his own party and challenge the conscience of a nation. And through steel towns and crowded housing projects and windswept Native American reservations, Bobby reinvigorated an American spirit that was bruised and battered and still reeling from assassinations and riots and protests—and hatred. And he had ambition, and he had moral clarity. He argued for unity over division, for compassion over mutual suspicion, for justice over intolerance and inequality. And standing on some makeshift platform, maybe on the trunk of a convertible or the back of a flatbed, sometimes speaking into a tiny microphone while an aide held up a portable speaker, he felt authentic, and he felt true, not stage-managed or prepackaged like so many people in public life.

Which is why when you look at the photos and you look at the footage of that remarkable period, what sticks out is the sea of hands surrounding him seemingly everywhere he went. Dozens of hands, hundreds of hands, thousands, every shape and every color, the smooth hands of children and the wrinkled, worn hands of the elderly, and they’re all reaching upward. He understood that it wasn’t blind optimism that he was peddling. Hope is never a willful ignorance to the hardships and cruelties that so many suffer or the enormous challenges that we face in mounting progress in this imperfect world…. [It’s] a belief in goodness and human ingenuity and, maybe most of all, our ability to connect with each other and see each other in ourselves, and that if we summon our best selves, then maybe we can inspire others to do the same. It’s been 50 years since we lost Bobby, and because we still seem to be grappling with some of the same issues that he was in 1968, when I was 7 years old, because we are still dealing with poverty and inequality and racism and injustice and environmental degradation and a constant stream of senseless violence, because of all that, it can be tempting sometimes to succumb to the cynicism, the belief that hope is a fool’s game for suckers. And worse, at a time when the media are splintered and our leaders seem content to make up whatever facts they consider expedient, a lot of people have come to doubt even the very notion of common ground, insisting that the best we can do is retreat into our respective corners, circle the wagons and then do battle with anybody who is not like ourselves. Bobby Kennedy’s life reminds us to reject such cynicism. He reminds us that because of the men and women that he helped inspire, because of the ripples that he sent out, because of the often-unrecognized efforts of union organizers and civil rights workers and peace activists and student leaders, things did, in fact, get better.

In the years since Bobby’s death, tens of millions would be lifted out of poverty. Around the world, extreme poverty would be slashed, and more girls would begin to gain access to an education. Millions of Americans would be shielded by health insurance that wasn’t available to them before. That progress is fueled—by hope. It’s not fueled by fear. It’s not fueled by cynicism. And this is maybe the most important thing: It’s not dependent on one charismatic leader but, instead, depends on the steady efforts of dreamers and doers from every walk of life, who fight the good fight each and every day even when they’re not noticed. Six years ago, Lucy McBath’s son was shot and killed in the parking lot of a gas station because the kids in the car were playing music too loud, apparently, and she turned her grief into hope and her hope into a seat in the next Congress, running unabashedly against the gun lobby in the great state of Georgia. She won.

And then there are the Parkland students. It hasn’t even been a year since a mass shooting stole 17 lives at their school, but less than a month later those students had helped to raise the age to buy a rifle in Florida. They’d lengthened waiting periods before purchase. A couple of weeks after that, they’d inspired hundreds of thousands to march in the nation’s capital and all across the country. And, of course, they haven’t won every battle, but online, in the media, in the streets, on college campuses, they have become some of our most eloquent, effective voices against gun violence. And they are just getting started. Who knows what they’re going to do once they can actually rent a car?

Ripples of hope. That’s the legacy, that’s the spirit, that Bobby Kennedy captured, standing on top of a beat-up car 50 years ago. Those are the ­descendants of the men and women and children who reached up into the sky, trying to get a touch of hope. The 44th president of the United States, Obama was awarded the Robert F. Kennedy Human Rights Ripple of Hope Award on December 12. This is an excerpt from his speech, shared with Newsweek.