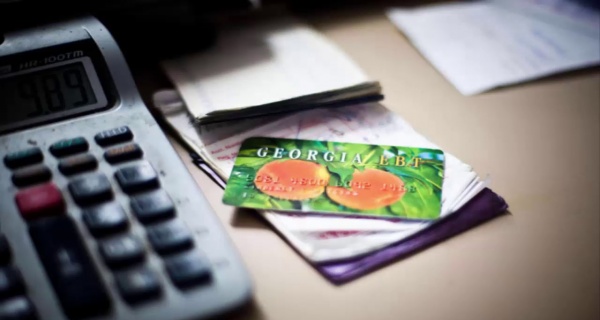 Date Posted: Wednesday, December 26th, 2018
The Trump administration last week announced plans to increase enforcement of a 22-year-old law withdrawing food stamps from certain adults who are not working.
But state data shows Georgia is way ahead of Washington. In 2018, the Georgia Division of Family and Children Services, the state administers of the federal Supplemental Nutrition Assistance Program (SNAP), dramatically increased the number of people removed from the program because of the work requirement.
In the six months from October 2017 through March 2018, the state removed an average of 356 people a month from food stamps for failure to meet the work requirement.
From April through October of this year, the average increased 20-fold — to nearly 8,000 a month.
One of those who lost his food stamp benefit was 25-year-old Covington resident Miraco Belcher. Belcher had worked a series of warehouse jobs until he was injured in an auto accident, fracturing his spine. Since the accident, he said he suffers seizures, especially around bright or flashing lights, making it hard for him to work.
Belcher applied for disability payments through Social Security, but the adjudication process for those benefits can take years. In August, he was tagged as “able bodied” and unemployed, so the state removed him from the SNAP program.
“I’ve been without stamps for two months now. It hurts,” he said in an interview in October. “I can’t work and I can’t come up with money for groceries.”
Belcher was baffled by the notice he received from the state ending the benefit.
“If I could work, I wouldn’t need those stamps,” he said. “I just don’t really understand it.”
Belcher worked it out, getting his primary care physician to vouch for him while he awaits his final disability decision. His benefits resumed last month. He’s lucky. Many low-income people do not have a regular doctor to call on for such a note.
“I’m not sure what the clients are supposed to do when they get these letters (from DFCS),” said David Deganian, an Atlanta attorney who is representing Belcher in his disability claim. “Most doctors don’t want to do that unless they have a chronological (record of) treatment.” 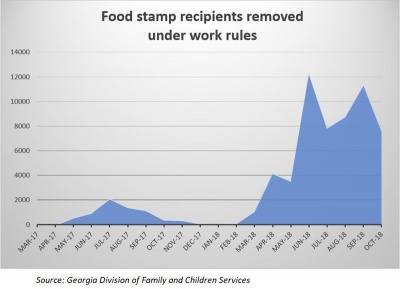 This chart shows the number of able-bodied adults without dependents (ABAWDs) removed from the federal food stamps program each month by the Georgia Division of Family and Children Services for failure to comply with a work requirement.
Most recipients are families
The work requirements were passed in 1996 and require adults between the ages of 18 and 49, who are not disabled and who have no dependents, to work at least 20 hours a week or be engaged in some sort of education or work training. The food stamp program refers to these people as ABAWDs, short for able-bodied adults without dependents.
The law gives them three months to meet the work requirement or lose the benefit. During the Great Recession, the federal government relaxed those rules, waiving the time limit for entire states or parts of states hard hit by higher unemployment.
Georgia was one of the states with a statewide waiver, but over the past couple of years, the state has gradually removed them for counties across the state as the economy has improved and unemployment has fallen. But another factor driving the dramatic increase in removals of able-bodied adults is the state’s new social benefits data management system — known as “Georgia Gateway” — which has given DFCS officials a clearer picture into the lives of food stamp recipients.
“We have more data elements available to us with this system than we have had with any of our other eligibility systems,” said Jon Anderson, head of DFCS’s Office of Family Independence said. “We are more confident in the system being able to identify ABAWDs than we were in earlier systems.”
The increased application of the work requirement affects only a small minority of the state’s 1.5 million food stamp recipients.
In Georgia, only about 8 percent of the population receiving food stamps are able-bodied adults with no children, while 71 percent of food stamp recipients are families with dependent children. A third of recipients are families with elderly or disabled members.
Advocates for low-income Georgians worry that the state’s rush to remove people from the food stamp program ignores the difficulty some adults have in finding stable work.
“People who use SNAP who can work, do work,” said Alex Carmardelle, a senior policy analyst at the liberal-leaning Georgia Budget and Policy Institute. “If you are not working and you are receiving SNAP it’s because of a serious reason.”