Leading By The Seat Of His Diapers, Uh, Pants 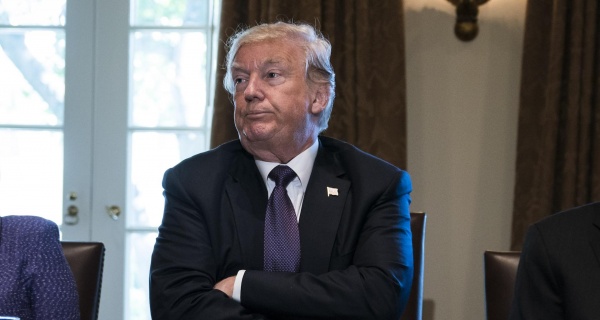 Yes, the President of the United States is a prime world leader as well as a figure that at once commands our troops, guides our security policies, sets an economic agenda, underscores our cultural contributions, promotes our health, education and welfare. Our President is someone we expect to lead, with grace, information and wit. Our President is someone of America, who sees the strength of the American melting pot.

Trump is showing his full hand now, that of a small-time thinker with an oversized ego who is leading through self-importance.

Our President is someone we expect will find ways to bring people together, not divide them, particularly over issues of race, ethnicity, income.
We have the latter in Donald Trump. Through a variety of new sweeping but baseless actions, insulting statements and tweets, through increasing isolation from advice that he finds unnecessary to filter his gut opinion, Trump is showing his full hand now, that of a small-time thinker with an oversized ego who is leading through self-importance.

Trump, under siege from 17 separate investigations and counting, is doubling down and doubling down again on seizing kingly authority to overcome any obstacles to making the rest of us bow to his will.  He is someone to whom we have granted powers that stretch the limits of the office who sees himself as unconstrained by facts, by courts, by law, by tradition, by alliances or even by common sense.

Our President should be capable of acknowledging that he may have made a mistake and correcting it.

Our President ought to be doing whatever he can to keep the government functioning – a failure since his actions or inactions have kicked off the partial shutdown that began at midnight Saturday.

In other words, forget whether you agree with the policy of the day that this president espouses or whether the approaches he supports are valid or effective. Set aside the specifics of how he delivers the message. At base, there is something in this country about having trust that its leaders are actually trying to preserve the values that have made this country what it is, and who accept and promote the idea that caring about the general welfare for all means just that.

Again, let’s look at the breadth of recent events:

Making abrupt troop withdrawals in defiance of his military advisers at the Pentagon and his international allies, and doing so by tweet, is absurd. Doing so is not leadership. The world response to his actions and the resignation of James Mattis as defense secretary are not just wallpaper, they should make a good leader understand that he has created risk and danger in renewed terrorist build-ups in faraway places.

Announcing that because there is a substantial objection in Congress to levying $5 billion towards a southern border wall, we should face a long shutdown of government services is not leadership. What happened to persuasion and compromise, to figuring things out? What happened to truth-telling?

For the Fed chairman to counter the White House policies with another quarter-point interest rate hike should make our leadership think anew about its economic policies, about its newly endless cycle of American-imposed tariff wars rather than more insulting tweets.

In a lesser-publicized note, the administration just imposed new tougher work requirements on food-stamp recipients, just a day or two after Congress voted on a farm-support bill that left out these requirements as unnecessary and a masked attempt to punish poor people. It is not leadership to stomp on those in need. This policy arrived along with the long series of attempts to take away healthcare from millions, a tax cut policy that has helped corporate interests over households, and education loan policies that have been tilted toward banks over students.

This president wants total loyalty from his appointees, no disagreement about policy or style. Picking new attorney general candidates who have publicly dissed the Special Counsel investigations is not leadership. Entering into individual legal matters is not leadership, nor is attacking judges, nor is the constant lying about involvements by himself, family or the Trump Organization in legally questionable affairs. We are left with the distinct impression that we have an unindicted felon in the White House who has made underhanded financial deals with America’s foes, not a moral, legal or true security-oriented leader.

The front pages and cable television coverage during these last days have been awash in absolutely horrible news – again, almost without regard to political orientation. We have hunger and death in the human tragedy that is Yemen, with American support for Saudi war-making. We have the troop withdrawal announcements that have surprised and shocked the participants and allies. We have North Korea blatantly insisting now that it will not lift a finger to disarm nuclear weapons unless the United States basically withdraws. We have the president involving himself in French street protests, and we have continuing terrorism events, this week in Strasbourg.

We have at least five open cabinet seats, disarray in Congress, continuing layoffs even as we promote the job growth supposedly happening as a result of corporate tax cuts, and a falling stock market and more talk of recession. We have international tensions over tariffs and the announcement of withdrawal from international treaties for trade and climate change. We have a continuing attack on the environment, and we have a crisis on the southern border, now impairing the functioning of our government.

This is a simple request: Should we expect that our president lead? I don’t see it. In its place, we have a petulant president who insists, the facts notwithstanding, on having his own way or not at all. We can do better.