Guess Who Can Profit If Trump Gets His Border Wall? 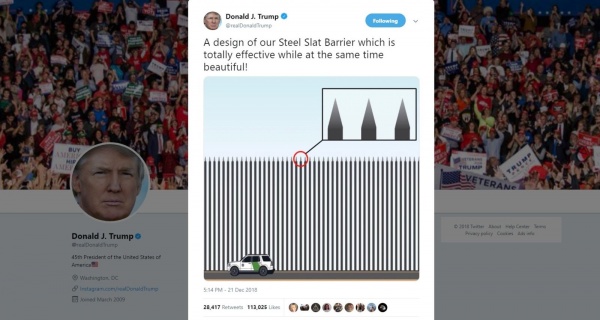 The latest design of Trump's 'wall' (which he acknowledges is a barrier more than a wall) includes high steel slats with spikes (the better to impale people and birds with). Some estimates have the slats costing upwards of $24.5M per mile (for a 1,993-mile border that logistically cannot be contiguous). That's a lot of money, especially with the steel tariffs that Trump has demanded.

The question must now be who will profit for all that steel? Well if the past is predictive, it's the Russians.

Four days after his inauguration, Donald Trump signed a handful of executive memos to advance the Keystone XL pipeline and revive the U.S. steel industry. He invited builder TransCanada Corp. to reapply for a permit denied by Barack Obama and ordered up fast-track rules forcing not only Keystone but also all new U.S. pipelines to be made from American steel. “From now on, we’re going to be making pipeline in the United States,” he said.

Made-in-America Keystone was a stunt. Most of its pipes had already been manufactured, a fact the White House grudgingly admitted when it exempted the project from any new Buy American rules a few months later. While some of Keystone’s pipes were made in the U.S., at least a quarter of them came from a Russian steel company whose biggest shareholder is an oligarch and Trump family friend. The company, Evraz North America, supplied Keystone from its steel plants in Canada and for years has lobbied in Washington against Trump-style protectionism.

The oligarch who owns Evraz, Roman Abramovich is a very close ally to Putin (owing much of his significant wealth to him) and a personal friend to Trump and the Kushners.

Shutting down the government was a weird hill for Trump to die on at this particular time. Even with Republican control on both houses of Congress, they couldn't pass wall/barrier funding--because of Trump himself refusing to include DACA in the deal. Now, in the lame duck, before the Dems take over the House majority, he thinks he has the leverage to insist on funding, solely based on the ravings of Ann Coulter and Rush Limbaugh? They're not even smart enough to figure out that he still couldn't get the votes from the Republican Senate majority to pass anything all year.

Maybe what the Dems need to do to get Trump to back down from his insistence that barrier funding is included in the CR is to write in the caveat that all products must be steel certified as being 100% American-made or funding is withdrawn entirely. And if it brings the whingeing of Coulter and the like, the fact that they don't care about hurting the American steel industry should be thrown in their faces immediately.