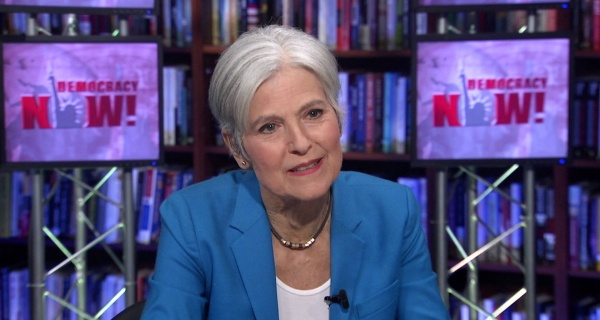 “The excuse that a lost Black vote for Hillary is a Trump win is bs,” it read. “It could be late, but y’all might want to support Jill Stein instead.”

According to a report commissioned by the Senate, the account was a fake, part of the Russian campaign to sway the 2016 presidential election in favor of Donald Trump.

The report was one of two that leaked this week saying the Russian effort to disrupt the election specifically targeted black voters and harnessed America’s top social media platforms. But the reports contained another finding that was largely overlooked — the Russians also focused on boosting Stein’s candidacy through social media posts like the one from @woke_blacks.

Building support for Stein was one of a “roster of themes” the Moscow-sanctioned internet trolls “turned to repeatedly” in their effort to disrupt the election, according to a research team led by the New Knowledge cybersecurity firm. The researchers also found that the campaign to bolster Stein gained in intensity in the final days of the presidential campaign and largely targeted African-American voters.

The reports, prepared by separate groups of cyber experts, add to the growing body of evidence that the Russians worked to boost the Stein campaign as part of the effort to siphon support away from Democratic candidate Hillary Clinton and tilt the election to Trump.

An NBC News analysis found that Russians working under the direction of the Internet Research Agency, the St. Petersburg-based firm run by a close ally of Russian President Vladimir Putin, tweeted the phrase “Jill Stein” over 1,000 times around the time of the election.

The posts were often accompanied by variations of the same hashtag, “Grow a spine and vote Jill Stein.”

“The fact that the Russian propaganda apparatus helped create awareness and support for her candidacy and promoted her candidacy is critical to our understanding of Russian interference in the 2016 election.

The Green Party did not respond to multiple requests for comment. NBC News also left messages with two Stein spokespersons, but they went unreturned.

There’s nothing in the reports to suggest that Stein was aware of the influence operation, but the Massachusetts physician has long been criticized for her support of international policies that mirror Russian foreign policy goals.

As a frequent guest on the Russian state-owned English language broadcast and online outlets RT and Sputnik, Stein has also benefited from Moscow’s help during her presidential runs in 2012 and 2016.

An NBC News review of the archives of RT and Sputnik, which the CIA has described as part of “Russia’s state-run propaganda machine,” from early 2015 to the 2016 election shows more than 100 stories, on-air and online, friendly to Stein and the Green Party.

Weiss said Moscow's support for Stein, in fact, began well before she became a presidential candidate.

“The Russian embrace of fringe voices like Stein goes back more than a decade to the earlier days of RT,” said Weiss.

Weiss also noted that the Stein campaign parroted the Russian position on Ukraine in 2016 and criticized the U.S. for installing a government in Kiev “hostile to Russia.”

In Feb. 2015, Stein announced her decision to form a presidential exploratory committee on the U.S.-based RT program “Redacted Tonight."

In the closing weeks of the campaign, RT quoted Stein suggesting that Hillary Clinton could lead the U.S. into a nuclear war with Russia and saying Trump was a safer choice.

"On the issue of war and nuclear weapons," Stein said, according to RT, "it is actually Hillary's policies which are much scarier than Donald Trump who does not want to go to war with Russia."

Most famously, Stein was one of two Americans invited to sit with Russian President Vladimir Putin at the head table of the RT 10th anniversary dinner in Dec. 2015. The other was General Michael Flynn, who was advising then-candidate Donald J. Trump and is now awaiting sentencing in the special counsel’s probe of Russian interference in the 2016 election.

Also at the table: Putin’s chief of staff, a former KGB general who had been sanctioned by the Obama administration for his role in 2014 annexation of Crimea and a deputy chief of staff who U.S. intelligence referred to as Putin's head propagandist.

Stein, in explaining why she traveled to Moscow for the event, has said she had hoped to speak with the Russian president about his policy in Syria, climate change and other issues. The Russian president declined the opportunity, Stein admitted. Stein has repeatedly said she did not accept any Russian support for her trip.

Clint Watts, an NBC News analyst who has been tracking Russian election interference at the Foreign Policy Research Institute, says none of what’s in the reports prepared for the Senate Intelligence Committee should be seen as surprising.

“Is Stein a fellow traveler or a useful idiot?” Watts asked rhetorically. “I don’t know, but even after the election, she played into Russia disinformation by pursuing a recount so heavily and claiming election fraud. This was a post-election coup for Kremlin propagandists.”