White America Is Waking Up To Trump's Broken Promises 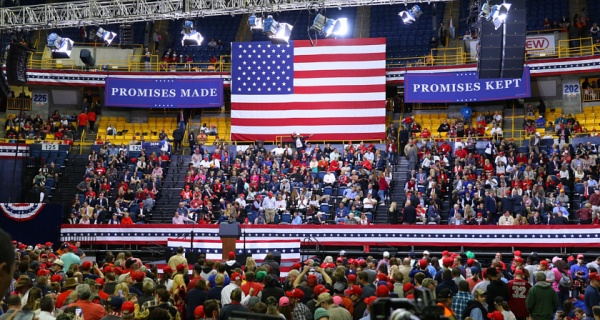 Donald Trump promised manufacturing and coal jobs to white America in a campaign message laden with racial scapegoating. Yet, two years later, the economic indicators show that Trump made false promises. On the one hand, unemployment is low, albeit as part of a trend that began under President Obama and for which Trump as president would take all the credit. On the other hand, many jobs are disappearing amid the administration’s policies, including his global trade war involving tariffs against China and other nations. Further, the Republican tax break for the wealthy and corporations will only exacerbate income and wealth inequality, in a country where workers suffer from the squeeze of wage stagnation.

General Motors, which benefited from a government bailout under Obama and has promised to increase manufacturing jobs, recently announced it is eliminating 15 percent of its workforce. This includes closing the Lordstown, Ohio, plant in the once-Democratic Trumbull County, which swung 30 points to vote for Trump in 2016. The news from GM comes as Ford Motor Company announced the steel and aluminum tariffs imposed by the Trump administration — including a 25 percent tariff on imported steel and a 10 percent tariff on imported aluminum, which have led to China imposing retaliatory tariffs on the U.S. — have cost the auto manufacturer $1 billion in profits, and will result in layoffs.

Trump benefited from his reality show-crafted image of a business mogul and economic genius and parlayed it into the presidency. His “Make America Great Again” slogan came with appeals to racial scapegoating and making false and empty promises to the “forgotten” Americans. The Trump strategy has employed white nationalism — of tapping into white grievance and stirring up white anger — but with a message of economic nationalism — renegotiating trade deals, bringing jobs back home to America and enacting massive infrastructure programs — that was mere rhetoric and could not deliver tangible benefits. Meanwhile, Trump himself has been accused of lacking any understanding of trade and being tariff obsessed, with protestations that other countries are ripping off the U.S. with trade surpluses, and engaging in a crony capitalism that benefits his family and friends and punishes his enemies.

“The forgotten men and women of our country will be forgotten no longer,” Trump told the crowd at his inauguration speech, touting an “America first” policy and promising to bring back jobs and return power to the people. “Washington flourished, but the people did not share in its wealth,” he said. “Politicians prospered, but the jobs left and the factories closed.”

Trump added that he would “fight for you with every breath in my body, and I will never, ever let you down.” However, critics have noted that in practice he has undermined the “forgotten” workers by clamping down on workers’ rights and making it harder for workers to unionize. Further, Trump is undermining rules and regulations to protect factory workers, farmers and consumers, and attempting to take away their health care, while providing substantial tax breaks to the wealthy. In so-called Trump country, in the industrial Midwest and the farm belt, the trade war is wreaking havoc on his white supporters and fueling regional decline, killing manufacturing jobs and family farms alike. For all their troubles, some farmers receive less than $25 in tariff assistance from the government to ostensibly offset the effects of other nations’ retaliatory tariffs that hit agriculture. That Michigan, Wisconsin and Pennsylvania — states that Trump won in 2016 — turned against him in 2018 with resounding Democratic wins in statewide and congressional elections could reflect disillusionment with Trump promises of economic relief that never came to fruition.

The evidence suggests that while Trump’s economic policies are hurting some of the core of his supporters, the non-college educated white working class, those voters were not motivated by economics when they voted for their candidate in the first place. Rather, they voted whiteness when they voted for Trump, and some have paid the economic price for it as a result.

Studies have shown that despite the assertion that Trump appealed to the white working class because of his promises to address economic issues — such as job loss, foreign competition and wage stagnation — white support for Trump was unrelated to economic distress, and had everything to do with racial attitudes. A Pew study found that there is a wide gap between college-educated whites and non-college-educated whites in attitudes toward Trump. Non-college educated whites, who experienced more economic distress, were far more approving of Trump, but this was because of their racism and not their economic distress. Other studies have shown Trump was able to tap into an appeal to authoritarianism, racism and sexism, and a fear of cultural displacement, of whites losing their privileged social status, in a country that will soon become a minority-white nation. That is not to say economic anxiety plays no role in American life, just that it was the wrong narrative to employ when discussing white Trump voters.

That racial resentment would trump economic concerns was in play in the most recent Mississippi Senate race. A Republican-controlled state, yet the blackest state in the union in terms of African-Americans as a percentage of the population (37.8 percent), Mississippi finds itself among the worst in the country in health, education and other social indicators. The state just elected Cindy Hyde-Smith in a runoff against her Black Democratic challenger Mike Espy. Hyde-Smith made white supremacist jokes about wanting to attend public hangings — Mississippi was the lynching capital of the nation — and promoted voter suppression of liberal college students. Rev. William Barber observed that Hyde-Smith’s policies will perpetuate poverty among people regardless of race. “Do they want a senator who makes these comments about racism, who jokes about public hanging, but also who promotes policies that will strangle the poor, that will hurt the poor?” Williams said on “Democracy Now!” “She’s against labor. She’s against labor rights. She’s against immigrants. She wants to push policies that will hurt poor people, mostly poor white people— white women and children and working people.”

President Lyndon B. Johnson, who was a son of the South, said: “If you can convince the lowest white man he’s better than the best colored man, he won’t notice you’re picking his pocket. Hell, give him somebody to look down on, and he’ll empty his pockets for you.”