New York Lawyer Who Attacked Subway Rider, Was Arrested In June For Assault 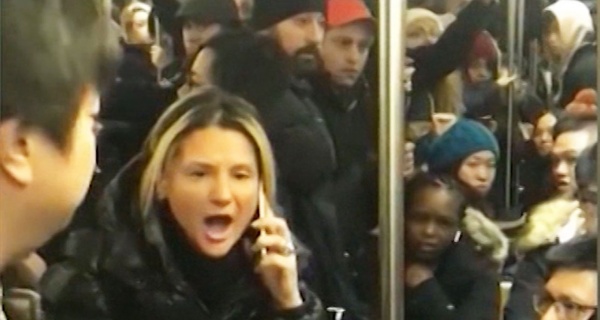 A woman who attacked another female passenger on board a D train in Brooklyn this week and had to be restrained by a rider has caused trouble on the subway before.

Anna Lushchinskaya, 40, was the subject of a citizens arrest last Tuesday morning after she repeatedly kicked a woman who was standing across from her.

But court records also show that Lushchinskaya was arrested in June on charges of menacing, harassment, assault and criminal weapons possession after allegedly pepper-spraying a man on the D train at the 36th Street station.

It means that this is Lushchinskaya's second arrest this year for a subway altercation, with both taking place at the 36th Street Station in Brooklyn, according to CNN.

In June, she was arrested for allegedly pepper spraying a man and woman, according to DCPI detective Sophia Mason. Both were Hispanic. She was charged with harassment, menacing with a weapon and attempted assault.

On Tuesday, the Good Samaritan who carried out a citizen's arrest on board the D train in Brooklyn has since opened up about his act of heroism.

Ayala, who works security and also has his own podcast, jumped into action after Lushchinskaya assaulted 24-year-old Michelle Tung with her umbrella and keys, and hurled a racial slur at her invoking the victim's Chinese heritage.

Ayala, who filmed one of the viral videos documenting the violent altercation, said Tung seemed extremely non-threatening and he had no idea what she possibly could have done to provoke the attack.

She had a bow on her head,' he told the New York Daily News. 'You can't get any more innocent than that. That's, like, a staple of innocence.'

The brave straphanger, who is of Dominican descent, said he decided to step in and perform a citizen's arrest on Lushchinskaya after the blond woman apparently mistook him for a Muslim person and called him by the name of one of the 9/11 terrorists, Muhammad Atta.

'B****, I'm Dominican,' Ayala shot back. 'I just had a bacon, egg, and cheese yesterday. Literally, the whole world is laughing at you.'

Lushchinskaya then turned her rage at the Good Samaritan, knocking his cell phone out of his hands and spitting on him.

After the 40-year-old woman took a swing at Ayala while brandishing a set of keys and declaring that she was an attorney, Ayala grabbed hold of her arms and pinned them behind her back.

'Without those seven or eight witnesses, if those cops saw a black guy holding onto a blond girl, I probably would have been shot,' the heroic commuter said. 'I was a little freaked out. I'm not gonna lie.'

Tung previously said that Lushchinskaya, whom she did not know, targeted her as soon as she boarded the train shortly before 8am Tuesday.

At first, she did not think the Brooklyn attorney was addressing her when she repeatedly yelled, 'f*** off.' But then Tung said Lushchinskaya purposefully bumped into her.

'And I said, 'Don't touch me with your bag,' and then that's when the video started with the 'f*** off,'' Tung told ABC Eyewitness News, referring to at least two viral cellphone recordings showing the violent altercation.

'She hit my phone and my hands,' Tung recalled, adding that she was scared, especially when Lushchinskaya grabbed a set of keys in her hand.

'I'm lucky that she didn't have any weapons on her, like knife, gun, 'cause it could've got [sic] a lot worse,' Tung said.

Tung said hearing Lushchinskaya use a racial slur against her 'really pissed' her off.

Tung also revealed that her attacker spat on her multiple times during the encounter.

'There's something wrong with her,' Tung added. 'I think she should be locked up at this point, and I'm lucky that it was me and not sometime else who wouldn't defend themselves.'

According to ABC, she suffered lacerations to her face.

Lushchinskaya was initially detained by another subway rider, who restrained her until police arrived. She was later charged with felony assault, marking the second time this year that she got in trouble with the law because of her conduct on board the D train.

Online records show that Lushchinskaya, who also uses the name Anna Luschchinsky, is an attorney with a small private practice in the Sheepshead Bay section of Brooklyn.

She graduated from New York Law in 2004 and earned her license later that year. She has no history of public discipline, according to the New York State Unified Court System's website.

Tung says she is afraid to run into Lushchinskaya again because she knows the woman often takes the D train.

Video from the bizarre incident, shot by Ayala, does not show what led to the altercation at 7.50am on the crowded train during the morning commute.

Lushchinskaya is seen screaming 'f**k off, f**k off' at the woman standing beside her, who is silent and appears preoccupied with her phone.

The blonde aggressor then slaps at the other woman's hand, and appears to begin preparing for combat by taking her sunglasses and gloves off, pulling her hair back, and whipping out her umbrella.

After a minute of such agitated preparations, Lushchinskaya suddenly kicks the other woman, who kicks her back.

Other passengers intervene and try to break up the fight. 'Yo lady, just chill out ok?' one says, while another shouts 'please stop'.

'You're not letting me hit her back!' complains Lushchinskaya, who goes on to call a man who is trying to stop her a 'f**king retarded'.

Lushchinskaya wields her small umbrella as a cudgel and continues to try to kick the other passenger as others hold her back.

The woman who is being attacked, who has been silent throughout, finally pipes up, saying: 'You come touch me, I will punch you right back. I don't care who the f**k you are.'

As Lushchinskaya continues trying to beat the woman, now identified as Tung, with her umbrella in a rage, a man intervenes and grabs the umbrella from her.

Lushchinskaya spits on the floor and again screams 'f**k off' as she flicks off the woman she had been trying to fight.

'F**king ch**k,' Lushchinskaya then screamed at her foe, drawing gasps from the crowded train.

'What! What!' shouts Ayala, the man filming the video. 'Your white privilege ain't working over here, get the f**k out of here.'

'You already know she voted for Trump,' he continues.

Ayala, who hosts a podcast titled Juan & Nyle's Podcast, then swooped into action to make a citizen's arrest until police arrived.

'She tried me so I had to detain her until the cops showed up,' he said, posting a photo of himself holding her hands behind her back.

New York state law permits any private person to use physical force, other than deadly physical force, to detain a person who commits a felony in their presence and is, in fact, guilty of the felony.