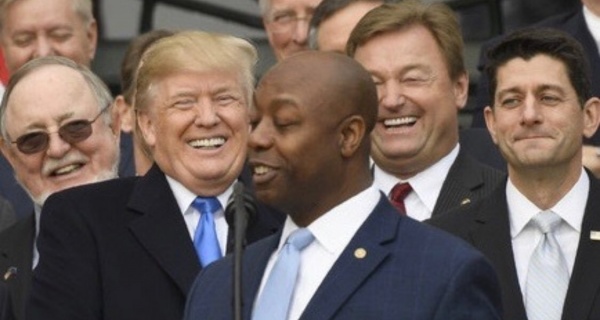 South Carolina’s Tim Scott is the only Black Republican in the Senate. He has been a champion for Trump’s racist policies and he finally got a conscience when he voted to oppose the nomination of Thomas Farr to the federal district court in North Carolina.

Originally, Scott was going to vote for him, but after pressure from the Congressional Black Caucus, he decided to use his brain. Scott said in a statement, “I am ready and willing to support strong candidates for our judicial vacancies that do not have lingering concerns about issues that could affect their decision-making process as a federal judge. This week, a Department of Justice memo written under President George H.W. Bush was released that shed new light on Mr. Farr’s activities. This, in turn, created more concerns. Weighing these important factors, this afternoon I concluded that I could not support Mr. Farr’s nomination.”

While it’s good he finally made a sane decision, he shouldn’t have needed the Congressional Black Caucus to know Farr is a raging racist. Moreover, one vote does not change his history of licking Trump’s boots. Back in July he bizarrely praised Trump’s foreign policy, in March he said he wasn’t “aware” of Trump’s racism and, we can’t forget, he praised Trump’s disgusting tax bill with Ivanka Trump — the tax bill that gave a bonanza to companies like General Motors, which still fired 14,000 people. Also, we can’t forget he voted for Brett Kavanaugh.

Tim Scott is still trash and Twitter agrees. See below:

1. We Own the House
@LeftonPost
Well, thank goodness. Still don’t trust you, Tim Scott because you’ve gone along with everything else Trump has done

I'm not taking it back cuz it's basically still true but kudos for doing the right thing.....for once.

@jimsciutto
Breaking: GOP Senator Tim Scott has decided to oppose the nomination of controversial federal judge Thomas Farr, effectively ending his chance of being confirmed. With GOP Senator Jeff Flake and all Democrats voting no, Farr will not have enough support to pass.

3. Adam Eichen
@AdamEichen
Senator Tim Scott might have tanked a disgustingly bad, anti-democratic, vote-suppressing judicial nominee, but he is still a right-wing extremist who helped confirm Brett Kavanaugh to the most important court.

4. King Kush
@TeamSmokie
Tim Scott trying to score points y'all. ???? Don't forget he still supports tRump 100% and was the brains behind that Tax Bill that robbed us all! ???? Tim Scott you are still a loser. Ok, carry on!

5. starryknight
@sharisknight
As for me and my -it’s still fuck Tim Scott.

6. Jeff Kemp
@jkempcpa
Yes. Let’s make sure that we don’t get all positive about Tim Scott because he did something that we agree with. He’s still Tim Scott after all.

@JamilSmith
Replying to @JamilSmith
This is not @SenatorTimScott’s victory. He just did the right thing—what anyone, black or not, should have done. Thomas Farr has no business being a federal judge, and the credit for ending his hopes (for the time being) belongs mainly to effective advocates and good reporters.

7. Judah Maccabeets????
@AdamSerwer
· Nov 29, 2018
Replying to @AdamSerwer
That said, Farr's involvement in intimidating black voters on the rabid segregationist Jesse Helms' behalf was immediately disqualifying and it should not have taken the GOP's only black senator to make that clear. It's not just his responsibility.

8. Clay
@claycane
Why are people praising Tim Scott because he finally voted with some sense to oppose Farr? He still voted to confirm Kavanaugh and votes with Trump 96.7 percent of the time. His policies has and will hurt people. Check the receipts.