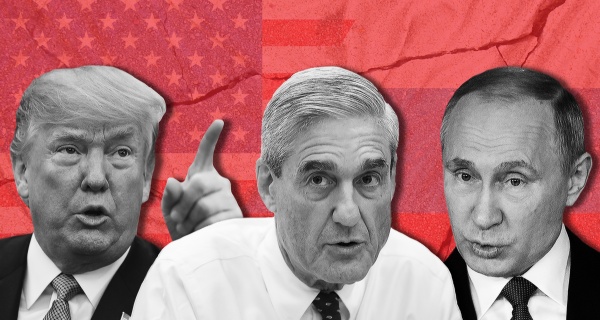 Donald Trump admitted Friday that he did actively consider business dealings with Russia well into the 2016 presidential campaign.

This was not only something Trump and his staff tried to keep quiet throughout the campaign, but it is also a significant departure from what he has said for the last two years.

Trump regularly denied having any connection whatsoever with Russia and consistently denied that he had any business dealings or really any interest in Russia.

On Thursday, former Trump personal lawyer Michael Cohen pleaded guilty to lying to Congress about whether the president spoke about Trump Tower Moscow during his campaign. One idea, according to an associate of Cohen’s, was to offer the $50 million penthouse to Russian President Vladimir Putin, although there’s no confirmation that Trump himself knew about the idea.

Now that we know Trump was discussing a significant business deal in Moscow during the campaign, it reveals his misleading denials over the years. This was also a deal Trump pursued alongside the central open question of the Mueller probe: Did Trump or his campaign collude with Russia to interfere with the 2016 presidential election?

Again, if the president had released his tax returns — something he could still do — he could provide assurances that he in fact has no dealings with Russian business interests. Until he does, all the country has to go on is his word.

Here are 14 times Trump denied having any business dealings or interest in Russia:

Trump said he had “ZERO investments in Russia.”

Trump denied having anything to do with Russia related to business, and questioned the intelligence of the reporter who asked him about it. He said the closest he came was selling an overpriced condo to “a Russian” a few years before.

QUESTION: (OFF-MIKE) Russia has no business in you — that you don’t have any…

Palm Beach is a very expensive place. There was a man who went bankrupt and I bought the house for $40 million and I sold it to a Russian for $100 million including brokerage commissions. So I sold it. So I bought it for 40, I told it for 100 to a Russian. That was a number of years ago. I guess probably I sell condos to Russians, OK?

TRUMP: Of course I can. I told you, other than normal stuff — I buy a house if I sold it to a Russian. I have nothing to do with Russia. I said that Putin has much better leadership qualities than Obama, but who doesn’t know that?

“I can tell you I think if I came up with that they’d say, ‘Oh, it’s a conspiracy theory, it’s ridiculous,’” Trump told a Miami-based CBS affiliate when asked about the idea that Russians were trying to help him get elected. “I mean I have nothing to do with Russia. I don’t have any jobs in Russia. I’m all over the world but we’re not involved in Russia.”

During his second presidential debate with Hillary Clinton, Trump asked to respond to Clinton’s suggestion that he release his tax returns to be transparent about any Russian influence. After arguing Clinton was a liar, he said he doesn’t deal in Russia:

I don’t know Putin. I think it would be great if we got along with Russia because we could fight ISIS together, as an example. But I don’t know Putin. But I notice, anytime anything wrong happens, they like to say the Russians are — she doesn’t know if it’s the Russians doing the hacking. Maybe there is no hacking. But they always blame Russia. And the reason they blame Russia because they think they’re trying to tarnish me with Russia. I know nothing about Russia. I know — I know about Russia, but I know nothing about the inner workings of Russia. I don’t deal there. I have no businesses there. I have no loans from Russia

In reality, according to Michael Cohen, Trump’s businesses were negotiating about a Moscow Trump Tower at least until June 2016.

Trump told a rally in Florida that he had “nothing to do with Russia, folks. I’ll give you a written statement.”

Trump told a crowd in Kingston, North Carolina that he had no business in Russia.

“First of all, I don’t know Putin, have no business whatsoever with Russia, have nothing to do with Russia,” he said. “And, you know, they like to say every time WikiLeaks comes out, they say this is a conspiracy between Donald Trump and Russia. Give me a break.”

Trump denies, in all caps, having anything to do with Russia, “no deals, no loans, no nothing.”

At his last press conference before his inauguration, Trump said he had “no deals that could happen in Russia, because we’ve stayed away”:

QUESTION: … how you plan to disentangle yourself from your business. But first, I have to follow-up on some of these Russian remarks. Based on your comments here today, do you believe the hacking was justified? Does Russia have any leverage over you, financial or otherwise? And if not, will you release your tax returns to prove it?

Trump’s assertion he had stayed away from Russian deals appears to be a lie, given his most recent admission, forced by Cohen’s admission.

Trump tweeted that he had no deals in Russia.

At a White House press conference, Trump knotted himself into a pretzel trying to deny he had anything to do with Russia — “I have no anything.”

May 11, 2017: Nothing to do with Russia apart from Miss Universe

Trump asserted he had “nothing to do with Russia” during his famous interview with NBC’s Lester Holt.

“I have had dealings over the years where I sold a house to a very wealthy Russian many years ago. I had the Miss Universe pageant — which I owned for quite a while — I had it in Moscow a long time ago. But other than that, I have nothing to do with Russia,” Trump said.

He also explained his decision to fire FBI Director James Comey came about “When I decided to just do it I said to myself, I said, ‘You know, this Russia thing with Trump and Russia is a made-up story.’”

Trump said on CNBC, “I have nothing to do with Russia. I never did.”

Trump said on Fox News, “I have nothing to do with Russia.”

Finally, Donald Trump revealed that he had in fact considered business deals in Russia during the campaign. He justified by saying there was no guarantee he would become president, and he didn’t want to lose business opportunities.

Even if he had agreed to the deal, Trump argued, it would have been ethically sound.

“My focus was running for president,” Trump told reporters on his way to the G-20 summit in Argentina. “But when I run for president, that doesn’t mean I’m not allowed to do business.”

Trump even said that it was “a project that everybody knew about.”

“There was a good chance that I wouldn’t have won, in which case I would have gotten back into the business, and why should I lose lots of opportunities? We decided — I decided ultimately — not to do it. There would have been nothing wrong if I did do it.”

Trump admitted that he “lightly looked” at a business deal for a building in Russia on Friday morning.

Trump was in Argentina for the G-20, ostensibly having decided to cancel his planned meeting with Putin at the summit the day before due to Russian aggression in the Ukraine.